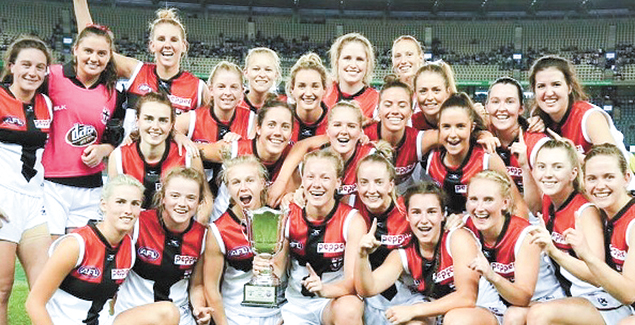 The redevelopment of St Kilda’s spiritual home in Moorabbin is on target to see the historic venue play host the club’s AFL Womens team when they play in inaugural AFLW season as of January 2020.

With Stage one of the redevelopment - which will include a museum, club shop and cafe - expected to be finished in November, the Saints are going through planning processes with the Kingston City Council to ensure stage two begins shortly after the first project is completed.

The second stage will include a 1000-seat grandstand along with aquatic and recreation facilities from for community use and is expected to be finished as of the start of 2020.

As reported by the St Kilda FC website, Club Chief Executive Matt Finnis advised “hopefully soon (after stage one is completed), we will commence construction on stage two and the first piece to happen there will be to commence our AFLW locker room construction so that that can be ready for our AFLW team coming online.”

With St Kilda players and staff having moved back to RSEA Park in March, Finnis added “the reality of when we first starting planning for the return to Moorabbin, AFLW wasn't even planned to be in place (so) for us to be able to create a venue for women to train alongside men with the same level of facilities, but then also create spectator facilities with a new grandstand, to be able to play Saints footy back here for the start of the AFLW season and hopefully for the JLT pre-season, will be terrific."

A $13 million contribution from the Victorian Government has helped fund the redevelopment.

Last week it was announced that St Kilda have signed a one-year extension with RSEA Safety as the venue’s naming rights sponsor.

Image: Players from the AFL Women’s Southern Open-Age Academy team in St Kilda colours at a curtain raiser match at Etihad Stadium prior to the 2017 season St Kilda and Geelong clash.