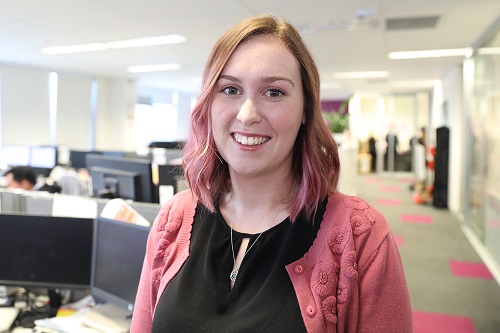 Developing and launching initiatives that improve the mental and physical wellbeing of young people has contributed to YMCA NSW Youth Wellbeing Coordinator Laura Eason being awarded Highly Commended for NSW Youth Worker of the Year.

The 23-year-old psychology graduate received the award for her outstanding contribution to youth work in the State.

One of the major achievements contributing to her nomination was YMCA Uplift - an early intervention youth mental wellbeing program targeting 12 to 25 year olds who have mental health issues or are experiencing stress due to studies, friends or family.

The eight-week program - launched last month as a partnership between YMCA NSW and Bendigo Bank - exposes participants to a variety of exercise types including boxing, sports/games and yoga. The young people have up to two facilitated group sessions per week and unlimited access to YMCA Penrith where the program is initially being trialled (or Teen Gym if under age 16). There is support and education offered on topics including exercising safely and nutrition.

After receiving her award last week (25th October) at the Youth Action NSW-hosted event at Ovolo Hotel, Woolloomooloo, Eason stated “when you see the difference your work can make in young people’s lives, every bit of effort is worth it.

“YMCA NSW has been willing to give me a lot of responsibility, freedom and trust to do my job and make things happen such as YMCA Uplift and Streetgym. I’ve been given so much professional development - they really invest and believe in me. I feel very lucky to work for an organisation that is willing to give young people like me a chance to lead and grow.”

Eason is part of YMCA NSW’s 1,850 strong workforce, 48% of which are under the age of 25 including child care educators, gymnastics coaches, lifeguards, fitness and Learn to Swim instructors, customer service officers, youth workers, administration officers and business managers.

YMCA NSW Chief Executive Susannah Le Bron added “we strongly believe in investing in our own people and we value great ideas, regardless of a staff member’s age and experience”.

“Laura’s achievement is a testament to her dedication and professionalism and a classic example of how we provide our young staff with opportunities for career challenges and progression.”