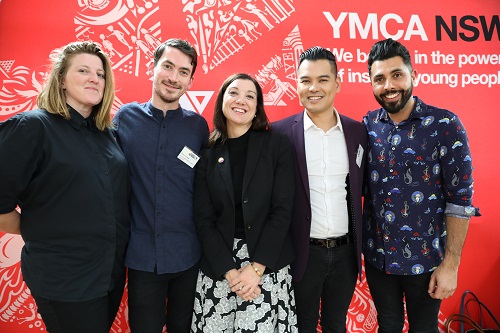 YMCA NSW has officially launched its LGBTI employee staff and advocacy group, the Affinity Network, to advocate for and facilitate a culture of inclusion and respect regardless of sexuality, gender and expression.

Founding member and YMCA NSW’s Youth Empowerment and Inclusion Coordinator Angus Lonergan said the Affinity Network, the first of its kind for a YMCA in Australia, raised awareness of LGBTI+ people and issues to support the Y as a ‘safe place’.

Lonergan explained “the Affinity Network is an employee support network about advocacy and education, however we want Affinity to mean something more than being just tick-box social group.

“We want it to be a group that provides development opportunities, support when times are tough, and spreads the mantra of empowerment through diversity and inclusion throughout our services.

Lonergan was earlier this year named the Out Role Model at the Australian LGBTI Inclusion Awards hosted by ACON’s Pride in Diversity – the national not-for-profit employer support program for LGBTI workplace inclusion.

Speaking on behalf of the organisation at the launch, YMCA NSW interim Chief Executive Lisa Giacomelli advised “globally, nationally and on a community level, since our inception in 1844 the YMCA has always been a place for people to belong. We are deeply committed to these ideals because it is morally right to do so and because we see the incredible value diversity brings; its strength and beauty.

“The Affinity Network is part of our long-term strategy to promote inclusivity and diversity in our organisation and in all the communities we serve and to celebrate the benefits diversity brings. I’m very proud that we are taking this step as an organisation and congratulate the founding members of the Affinity Network for their exceptional work to bring this into being.”