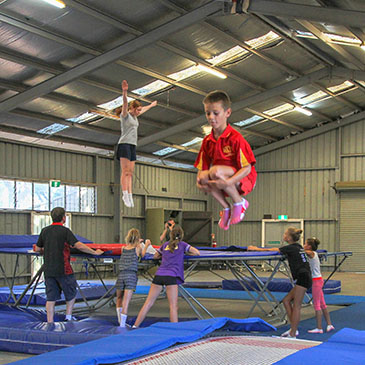 YMCA NSW is emphasising that parents should make the most of the NSW Government’s $207 million initiative to get more children involved in sport and physical activity.

The Active Kids Rebate, which begins today (31st January), provides school-aged children with a $100 voucher for the calendar year to help cover the cost of sporting and fitness activities.

Highlighting the value for parents in signing up their children to one of YMCA NSW’s gymnastic programs or try out its range of indoor sports and Teen Gym classes, YMCA NSW Chief Executive Leisa Hart explains “YMCA NSW is fully behind this Government initiative to increase the physical activity of kids, especially given that one out of every five young people aged five to 17 years in NSW is considered to overweight or obese.

“This rebate will help to relieve household costs by putting $100 back into the pockets of mums and dads – it’s addressing one of the most significant barriers for kids to participate in sporting programs, which is affordability. So we’re encouraging families to take advantage of this offer and set their kids up for a healthier life.

“Gymnastics is a great introduction to a sport that promotes getting kids active and reducing obesity. It also helps build their confidence, strength and co-ordination skills.”

“Our gymnastics classes cater to all ages and skill levels, so whether you want to try out a new sport, learn to back-flip, or want to further your skills on the competition stage, YMCA NSW has it covered.

“YMCA NSW also runs a variety of indoor sports with junior and senior competitions for netball, football, basketball and even futsal.”

“Our Teen Gym classes are great for young people who want to be a part of a group exercise environment. During the session they work with a personal trainer who helps them build their fitness levels with tailored cardio workouts.

“YMCA centres also allocate times during the week that Teen Gym participants can come in and train in the gym without their parents and still have adult supervision from staff.

The government-funded program runs for four years and parents can redeem their vouchers for any sporting/physical activity program of at least eight weeks’ duration.

Hart adds “swimming lessons are unfortunately not mandatory in Australia for children and it’s concerning that thousands of kids haven’t had access to swimming lessons in previous years for a range of reasons, one of which is the cost.

“A study conducted by the NSW Government showed that of the children who had drowned or near drowned, less than half had taken part in swimming lessons.

“We believe that every child should have the opportunity to learn to swim and the Active Kids Rebate helps to make lessons more accessible for families.”

To find out more about the Active Kids Rebate go to www.sport.nsw.gov.au/activekids