YMCA NSW cleans up at the ACT Aquatic Industry Awards 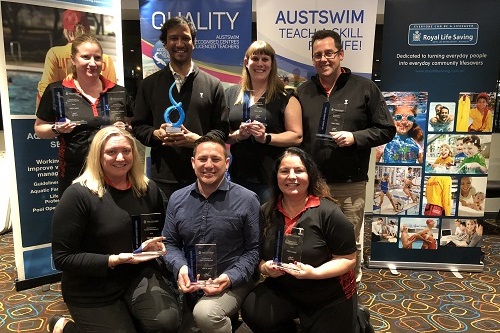 YMCA NSW’s commitment to drowning prevention and water safety education has been rewarded  with a clean sweep of trophies at the ACT Aquatic Industry and Water Safety Awards.

Co-hosted by Royal Life Saving ACT and AUSTSWIM, the Awards’ event (held on 13th September) celebrated outstanding standards across industry and the community for individuals, schools, organisations and community groups during 2017/18.

In a personal victory, Yohann Gopaul, swimming instructor at the YMCA-managed facility in Gungahlin, won the AUSTSWIM Teacher Access and Inclusion Award.

Mathew Pole, YMCA NSW Area Manager for the ACT, said Gopaul should be incredibly proud of his award along with the amazing teams whose dedication to safety contributed to such a successful outcome.

Pole stated “the results are a testament to the hard working, devoted staff across the three ACT Government sites which are proudly managed by YMCA NSW.

“We acknowledge the support of both the ACT Government and Royal Life Saving ACT in ensuring that we provide facilities of the highest quality.”

The Awards event was held at the Canberra Labor Club in Belconnen.