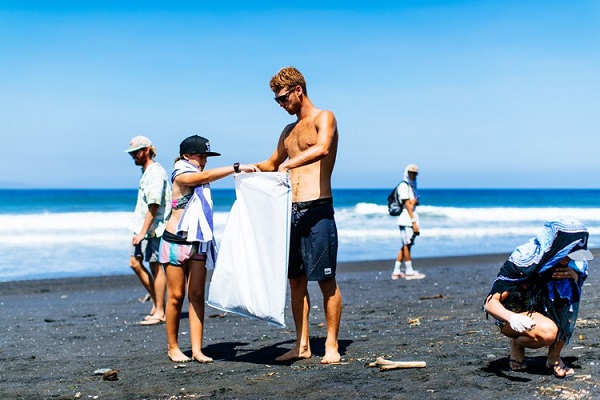 The World Surf League (WSL) has pledged to become carbon neutral by the end of 2019, as part of a series of new sustainability commitments it claims will ‘set a new standard’ for professional sports.

Surfing's international sanctioning body is also pledging to eliminate single-use plastics within the next six months, which will apply to all WSL Championship Tour and Big Wave Tour legs.

The latest commitment to preserving the environment was inspired by a number of alarming trends surrounding climate change and plastic pollution, and will tie into this year's World Oceans Day - being held tomorrow, 8th June.

The WSL cited the fact that the ocean has absorbed over 90 per cent of excess heat and 30 per cent of the carbon in the atmosphere, resulting in rising sea levels, a higher frequency of, and more intense storms, and ocean acidification.

The organisation also noted that plastics break down into small microparticles that are ingested by marine life, ultimately entering food and drinking water.

“We believe it’s our responsibility to be ‘all in’ with our efforts to protect the ocean and beaches amid the devastating climate crisis we all face and we invite everyone who cares about the ocean to join us.”

The WSL will aim to offset its carbon footprint by supporting REDD+ (reduce emissions from deforestation and forest degradation) and VCS (Verified Carbon Standard) certified carbon offset projects around the world.

While STOKE (Sustainable Tourism & Outdoors Kit for Evaluation) Certified will aid the WSL in calculating its carbon offset program.

The WSL will also look to reduce non-essential corporate travel and regionalise its operations where possible, and rely more on locally-based contractors to help stage its competitive events.

Goldschmidt added "it’s quite a complicated formula that goes into the offsets, but the travel is the biggest contributor to our carbon footprint and we’ll look to reduce that as we can."

The WSL is one of a handful of athletic organisations to sign the UN Climate Change agency’s Sports for Climate Action Framework – a global commitment to adhere to the fundamental principals of the Paris Climate Accord and incorporate strategies to minimize carbon emissions.

Other signatories include the NBA, FIFA, the International Olympic Committee, the Tokyo 2020 Olympics Organising Committee and the New York Yankees.