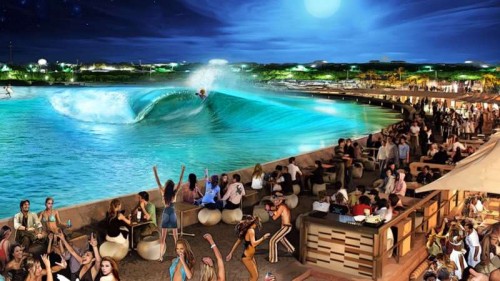 WSL Holdings, the parent company of the World Surf League, has announced that it will acquire a majority stake in the Kelly Slater Wave Company (KWSC) for an undisclosed sum.

Founded in 2008 by multiple world surfing champion Kelly Slater, KWSC has been undertaking the ongoing development of an artificial competition standard surfing break with the goal of "making a world-class surfing experience accessible to the sport's enthusiasts across the globe."

Last December, instagram footage showing Slater, the world’s best-known surfer, riding a three metre artificial wave drew massive acclaim, with Slater, in the voiceover, stating “this is the best man-made wave ever made. No doubt about it.”

A statement on the acquisition explains “the partnership between the WSL and KSWC will be dedicated to promoting the growth of high-performance surfing around the world. “KSWC's revolutionary technology creates a number of possibilities for the future of the sport (and) the WSL and the KSWC envision the build-out of a global network of WSL-branded high-performance training centres utilising this wave technology.”

While Slater’s has wave technology has been linked with developments at a number of sites over recent years, it is believed that high development and potential operating costs have necessitated the need for the company to seek new backing.

WSL, the governing body for professional surfers, sees Slater’s wave as a way to make surfing accessible to the masses and giving the entire industry a much-needed boost.

WSL Chief Executive Paul Speaker explains “the WSL proudly represents the best in men's and women's competitive surfing globally, and the amazing man-made wave technology developed by Kelly Slater and his team is a revolutionary innovation that has the power to dramatically enhance every aspect of our sport.

"We share the same vision and passion for growing high-performance surfing, and are beyond excited to work together under one roof to bring the sport to levels and places never before possible."

WSL is believed to be enthusiastic about running future competition events in artificial wave locations as such events would no longer be dependent on wave or swell conditions, making them more predictable and easier for live TV, while sponsors would enjoy reaching new markets and audiences.