Second URBNSURF attraction to be developed at Sydney Olympic Park 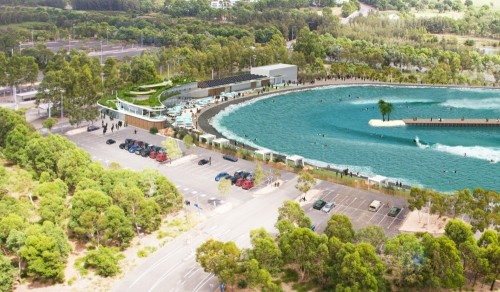 Just weeks after the announcement that Australia’s first urban surfing lagoon will be built in Melbourne, developer the Wave Park Group has today confirmed that it has been nominated as the preferred proponent over a 3.2 hectare a site located at Sydney Olympic Park.

The estimated $26.5 million attraction, to be known as URBNSURF Sydney, will be located adjacent to the existing Monster BMX Track and Monster Mountain X developments, adding significantly to the existing public action sports.

Wave Park Group founder and Executive Chairman Andrew Ross explains “the best part about the Wavegarden technology is that it can cater for everyone across a range of surfing abilities - from those just learning, right through to elite athletes and their high performance training needs.

“Waves will range from up to 1.7 metre high, pitching waves, that are designed for the highest levels of performance surfing, down to 0.6 metre high, rolling white water waves,which are ideal for beginner surfers. “Waves will form cleanly and break with constantpower and shape throughout the ride, which will be the equivalent to riding high-quality ocean‐based waves of similar sizes.

“Sydney’s 200,000 plus surfers will have another optionavailable to them, day and night, year round, within a short distance of the Sydney CBD.”

As well as having amenities like a pro store and surf training academy, a licensed café and function centre, URBNSURF Sydney will also be home to a climbing wall, parkour trail, skate courseand other lifestyle sport opportunities.

With a north-south lagoon orientation, URBNSURF Sydney is being designed to suit prevailing wind conditions and LED lagoon lighting means there will be surfing night and day.

Ross adds “Sydney is blessed with anumber of great surfing beaches, but access to those beaches and overcrowding in the line-up isbecoming an increasing issue.

“URBNSURF Sydney will bring the beach to your backyard, unlocking the geographic limitations of ocean based surfing.

“Through the developmentof urban surfing environments, we are providing the opportunity for surfers to engage with their sport more frequently, more conveniently, and more safely – allowing them to simply ‘surf more’.”

Wavegarden wave generating technology has been in development for over 10 years, created and perfected by a team of 26 engineers based in Europe. The first commercial surfpark facility featuring a Wavegarden lagoon opened in Wales in 2015, and another is due to openshortly in Austin, Texas, USA.

Ross continues “the development of URBNSURF Sydney will generate over 300 jobs during theconstruction phase, and another 45 full time positions will be created in the surf park when itopens its doors.

“The surf park will inject more than $250 million in grosseconomiccontribution to the Sydney region over the project life, and we have well-progressedplans for additional URBNSURF facilities around Australia which will be announced in thenear future.”

Detailed feasibility studies are now underway, with a development applicationexpected to be submitted towards the end of 2016.

Following receipt of development approval, construction activities are likely to commence in mid-2017, with the expectationthat first riders will take to the waves at URBNSURF Sydney in mid to late 2018.

Welcoming the attraction, NSW Minister for Trade, Tourism and Major Events and the Minister for Sport, theHonourable Stuart Ayres commented “the UrbnSurf Park is a massive vote of confidence in the future of western Sydney tourism.

"Sydney Olympic Park is a thriving business, entertainmentandsporting precinct. It's already a hive of activity, from the skate parks to mountaincross; we can now throw surfing into the mix!"

Surfing NSW Chief Executive Mark Windon supports the development, saying “Surfing NSW fully supportsthe development of URBNSURF Sydney, and sees this as another positive step for the sportof surfing worldwide and in NSW.”

With surfing vying to become an Olympic medaportor the 2020 Tokyo Games, the location is a perfectfit for the future of the sport. The recently announced $1 billion Parramatta Light Rail Project is likely to locate a station adjacent to the facility, which will mean URBNSURF Sydney will be accessibleto over two million Sydney residents in under 30 minutes. 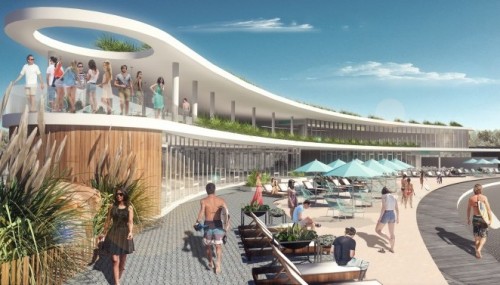 Odriozola stated “we are thrilled to be associated with the development of URBNSURF Sydney, and especially in such an iconic Olympic location.

“I can see this facility becoming a true destination for new and experienced surfers alike.

”We are confident of delivering an outstanding Wavegarden lagoon that will meet the needs and expectations of all who visit.”

Images show designs for features at URBNSURF Sydney (from top): an aerial view of URBNSURF, beach side at URBNSURF and the amenity building.