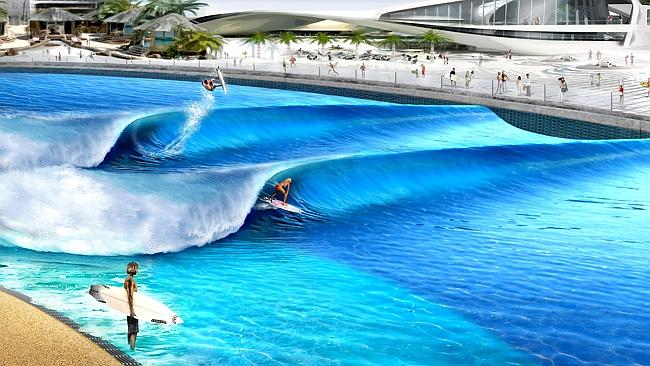 Earlier this year, Sydney-based developer Greg Webber signed a Memorandum of Understanding with David Baird, spokesperson for developers Waterplay Pty Ltd, to build the first of his Webber Wave Pools.

While static wave simulators are installed at attractions and waterparks around the world, a number of developers, including multiple surfing world champion Kelly Slater, have sought to develop an authentic surfable wave in a wave pool environment.

Using a hull, or 'foil' that displaces water and send a wake that forms a sustained wave, Webber has been developing his technology over for 10 years. The Sunshine Park installation will be a significant move forward for his technology, coming at a time when overcrowding of popular natural surf breaks is highlighting that surfing needs artificial attractions for the sport to develop internationally.

The proposed pool will be 160 metres long by 80 metres wide, which will make 1.6 metre waves with rides of 15 seconds. As shown in this video, waves will move down either side of the pool.

When complete, the Webber Wave Pool will generate eight waves a minute or around 480 waves an hour at heights of between 1.65 metres and 1.82 metres.

Webber predicts that each 15 second ride will cost under $1 in energy costs.

Other plans for Webber Wave Pools at locations in Ipswich and the Gold Coast have not yet come to fruition.

For more information go to www.webberwavepools.com