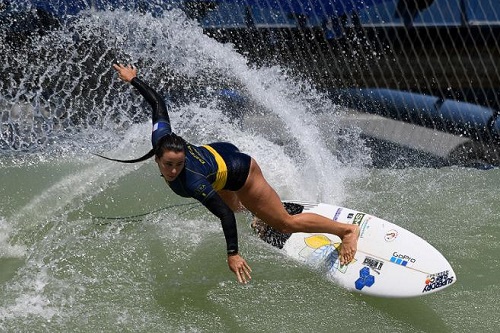 The latest round of the World Surf League (WSL) has commenced in the USA, marking the first time that the World Championship Tour has been staged using artificial wave technology.

Part of significant change for the WSL, Kelly Slater's Surf Ranch Pro is being held on man-made waves at Lemoore, an inland town lying in California’s farm belt 70 metres above sea level and 200 kilometres from the Pacific coastline.

Following a trial at the venue for the WSL Founders’ Cup of Surfing in May, the event is making use of technology developed by 11-time world champion Kelly Slater and the Kelly Slater Wave Company (KSWC).

The largest ever application of artificial surf technology, KSWC's waves are created by a system of hydrofoils that are propelled by a train-like vehicle running down a gantry alongside the rectangular pool. The blades dig into the water to produce on-demand waves in the 600-metre lagoon.

Delivering consistent waves with barely a rib or wrinkle in them, the system replaces the randomness of the ocean, with surfers riding from a left-hand break from one end, and then a right-hand break on the way back.

From Thursday until tomorrow (Saturday 8th September) all 54 competitors - 36 men and 18 women - surf six waves, three right, three left, with their best scores for each combining for their total. Finalists are decided on these scores, and on day four each qualifier rides another six waves, with the same scoring method employed to decide the winner.

The US $30 million wave, powered by renewable energy, was 10 years in the making, inspired by Slater's long-held dream.

With surfing to be an Olympic event at the Tokyo 2020 Games, to be held on ocean waves, the potential for Slater’s technology to expand surfing as a stadium-style event is huge, notwithstanding the high levels of power usage that artificial waves demand.

Commenting on the technology, and how artificial waves differ from those in the ocean, Slater explains "surprisingly (they are) not very different. It's actually got more power and speed than most waves of its size in the ocean. It reminds people of some of their favourite waves around the world and that's the biggest compliment to it from the hardcore surfers."

It may lack the authenticity of the sea, but Slater says "nothing will replace the ocean", adding that artificial waves should "supplement" that experience.