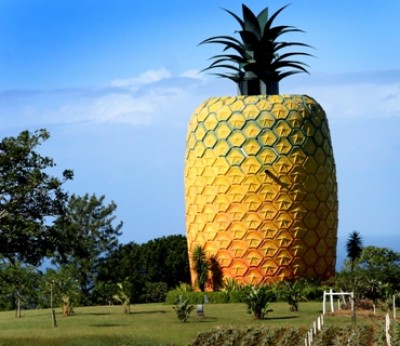 Work on the $150 million master plan to ensure the Sunshine Coast’s Big Pineapple returns to the glory days it enjoyed as a popular, stand-out tourist attraction in the 1980s is gaining pace.

The Tree Tops Challenge high ropes and zipline course is nearly complete. The two-kilometre course, featuring about 120 activities, with a variety of challenges including a 120 metre zipline will take people around a half a day to complete.

New attractions for the sprawling 170 hectare site include a water park, an adventure precinct, a major concert event space and on-site accommodation as well as a $60 million-dollar agribusiness precinct, with work on upgrading the former macadamia nut factory now well advanced.

The renewal plans for the Big Pineapple across the site include:

Big Pineapple Renewal Project Director Jim Costello said the redevelopment of the Big Pineapple would ensure the attraction remained an icon on the Sunshine Coast long into the future, commenting "our renewal master plan is set to position the Big Pineapple for sustained success, with an emphasis on showcasing the region’s famous, world-class produce and other attractions, including major music events, adventure tourism.

“Our plans set our vision for the future, but the Big Pineapple renewal is also about the ‘here and now’ too with an active events program, a high quality zoo, TreeTop Challenge about to commence operations and COYO organic yoghurt set to establish their international base here later in 2019.”

Minister Jones said the full renewal plans would entice more than a million visitors per annum to the Sunshine Coast, rivalling peak visitation in the 1980s when the Big Pineapple was Australia’s number one tourism attraction.

She added “importantly this will pump $45 million per annum into the Sunshine Coast economy through expenditure and overnight stays.

“More tourists than ever before are flocking to the Sunshine Coast every year. Projects like this will ensure visitor numbers only continue to grow in the future.

Latchford concluded “it’s so good to see the Sunshine Coast’s nationally recognised and legendary landmark investing in renewal to reposition the precinct as an agritourism and visitor icon. For many Australians, the Big Pineapple holds treasured memories, so it is great that it can once again be a must-do family and tourism experience.

“As part of the offering, food-based tourism is a strong, emerging part of our broader tourism economy and an increasingly important drawcard for the Sunshine Coast.

“While the Sunshine Coast may have some of Australia’s most appealing natural attractions, a new era of hotel and tourism products is vital for the Sunshine Coast if we are to fulfil the region’s tourism potential, grow the economy and provide a significant flow of new jobs for the area’s growing population."