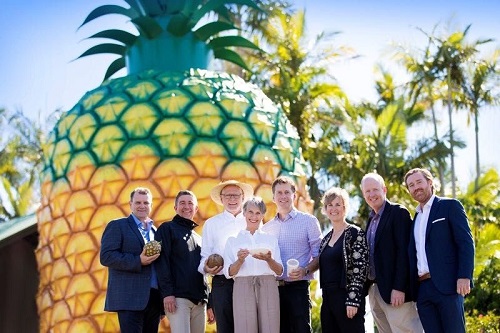 Popular Sunshine Coast tourism landmark and home of the famed pineapple parfait, the Big Pineapple, has received a major boost with the announcement it will be the site of the national headquarters for leading organic coconut yoghurt producer COYO.

The relocation will see Sunshine Coast-based COYO occupy the refurbished, former Macadamia Nut Factory as part of the Big Pineapple Renewal Project - designed to re-establish the precinct as one of Queensland’s most innovative agritourism precincts.

Opened in the 1970s, in its heyday, the Big Pineapple attracted over one million visitors annually, including Prince Charles and Princess Diana, but was temporarily closed in 2010.

However, with new ownership and the approval of the Big Pineapple Master Plan, a major push is on to regenerate the 162 hectare site as a showcase for Sunshine Coast produce, complemented by camping and glamping-style accommodation, family recreational activities, food outlets, and events spaces.

Big Pineapple Renewal Project Director, Jim Costello, said the relocation and expansion of COYO’s production at the Big Pineapple was another exciting chapter in the renewal of the Sunshine Coast’s most famous icon.

Costello advised “the announcement of COYO’s new tenancy follows recent confirmation of the Treetop Challenge adventure course at the Big Pineapple, which will shortly be under construction, and comes on the back of The Big Pineapple Music Festival being named Queensland’s best music festival.

“We also see the site as a hub and destination for micro-breweries and distilleries, and becoming a major production centre, with added food tourism and education opportunities.

“In the months ahead, visitors will be able to drop into the Wildlife Zoo after they progress through the many experiences of the TreeTop Challenge, and then take in a concert in the evening, after a selfie with the Big Pineapple.

“The return of the Big Pineapple is a major undertaking, and we will keep chipping away, adding new attractions and employment generating tenancies, just like COYO, to deliver our master plan vision over the months and years ahead.”

The well-known ‘Big Thing’ is located prominently on the Nambour Connection Road in Woombye, on the road between the coast and Nambour.

Originally developed in 1971, the attraction was created the Sunshine Plantation as a new concept in agritourism, using the region’s rich agricultural heritage to attract tourists.

Since reopening, the Big Pineapple’s facilities have been used for large-scale concerts while with the Big Pineapple master plan approved in 2017, the attraction has set out to re-establish itself as a food manufacturing hub and food tourism precinct with events space, educational facilities, eco-tourism activities, and eco-style accommodation to enhance its natural assets and tourism experience.