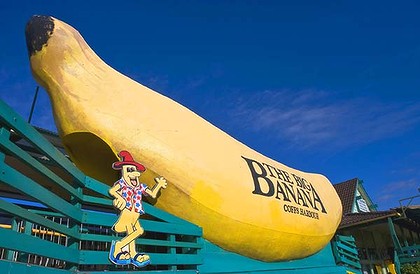 Long dismissed as tourist kitsch, Australia's ‘Big Things’ - giant models of everything from prawns to bananas - are now being heritage-listed and recognised as works of folk art.

The gaudy structures, commissioned since the 1960s by country towns keen to attract tourists, have gathered respect as national icons.

As artist Reg Mombassa explains "they're like our pyramids, our temples.

"Because European settlement was so recent, Australia doesn't have historic old buildings like in other countries and the Big Things are a way of saying 'we're here, this is our place.'"

Australia has more than 150 Big Things, including the Big Banana at Coffs Harbour; the Big Guitar in Tamworth, NSW; the Big Pineapple in Nambour, Queensland; and the Big Gumboot, an oversized Wellington boot that adorns Australia's wettest town, Tully in Queensland.

Mombassa, internationally renowned for his designs for surfware brand Mambo, painted his favourite Big Things in 2007 for a range of stamps commissioned by Australia Post.

He said he first fell in love with them when travelling around the countryside in a crowded mini-bus in the 1970s and 1980s with his band Mental As Anything.

"You'd be on these long, long trips and they'd break up the tedium," Mombassa explained adding that the ‘tackiness’ of ‘Big Thing’ is part of their charm, calling them a typically extroverted Australian phenomenon.

"Some of them are pretty crappy but others are folk art, definitely.

"You look at the Big Merino (a giant sheep sited next to a petrol station in Goulburn) where they've recreated the texture of the wool in concrete." 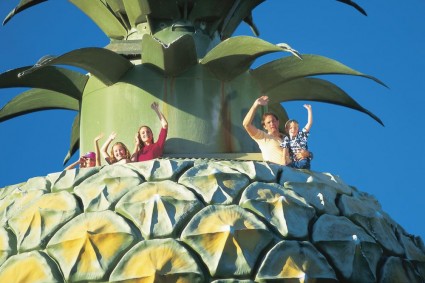 The Big Things' highest accolade came earlier this year when the Queensland government placed the Big Pineapple on its heritage register, ranking it among the state's top historic buildings and cultural sites.

The Queensland Heritage Council said the 16-metre high fibreglass fruit had attracted millions of visitors since it opened in 1971.

There have also been lovingly photographed coffee-table books dedicated to Big Things, and websites where overseas tourists express a mixture of admiration and bemusement at the giant structures.

Julie-Anne and Rob McPherson fell under the spell of the Big Things late last year, when they bought the Giant Koala at Dadswells Bridge in Victoria.

Rob was working as an incident controller on Melbourne's motorways at the time, an often stressful job investigating car crashes, and the couple wanted to escape the rat race.

"We were looking to maybe buy a caravan park or something," Rob explains, adding “but I stopped in here, found the place was for sale and just fell in love with it."

The McPhersons are in the process of revamping the koala, nicknamed Karla, installing red lights in her eyes to give her an imposing night-time appearance and applying a lick of paint to make her markings more distinctive.

In recent months, Karla has been featured in comedian Paul Hogan's yet-to-be-released feature film ‘Charlie and Boots’ and a national advertising campaign for a telephone company.

Rob said the public's fascination with ‘Big Things’ showed no sign of waning, stating “we get 100 cars a day coming here and buses making the trip specially, bringing in 50 people at a time.

"There's just something special that appeals people, it's a sense of fun or something, I don't know."

As he explains “as the major wine growing areas of Australia now have wine trails, and the Hunter Valley has a food trail, why not have a ‘Big Things’ trail?

“To do this properly there should be a ‘Big Things’ association which admits ‘Big Things’ to its membership, creating a co-ordinated, national network of ‘Big Things’ to improve their overall quality and for the benefit of local and rural tourism.

“Local tourist offices may like to build ‘Big Things’ outside their offices, and state tourism authorities may like to provide some finance and marketing.

“The whole thing could be kicked off with a ‘Big Things’ competition nationwide, repeated annually to find the best ‘Big Thing’ and improve overall quality.

“A key to this idea is that the ‘Big Things’ should promote the tourist attractions of the whole area and not just a single attraction.”

Images: The Big Banana, Coffs Harbour (top) and the Big Pineapple on the Sunshine Coast (below).