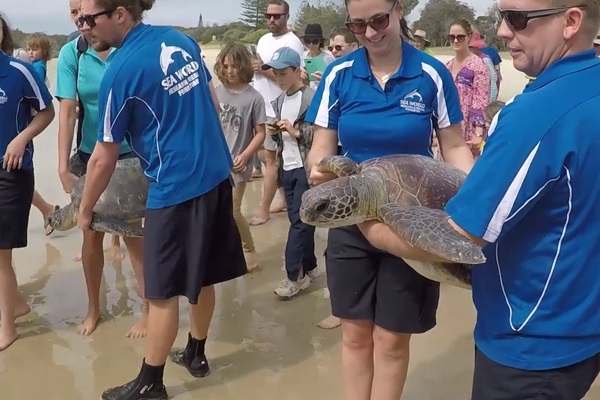 The conservation team at Gold Coast theme park Sea World team have released two Green Turtles back to the ocean at Fingal Heads after just over a month of rehabilitation at the marine park.

The two turtles, ‘Swim Shady’ and ‘Cookie’ were brought to Sea World in late July where they were under the care of the expert veterinary and marine sciences team.

While at Sea World, the turtles were placed on a rehabilitation regime which included feeding, veterinary checks, treatments and data collection.

Sea World Curator of Fishes, Marnie Horton said this a wonderful result and it is a credit to the team to be able to release these turtles, commenting “both turtles were found floating off Cook Island by a local dive team and were taken to our veterinary facility at Sea World and put on a rehabilitation regime.

“Thanks to their rehabilitation regime, both turtles’ body condition and swimming behaviour returned to normal and their appetite increased to a level where they were both suitable for release. 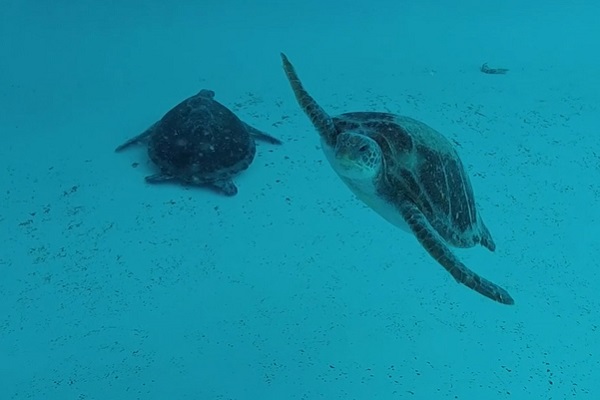 “It is a great outcome for the turtles and the ability to release them back to Fingal Beach, which is the area where they were located, is really pleasing as we know this is a good habitat for the species.

“On average Sea World rescues 50 turtles annually with many coming into our care with injuries due to human interaction such as fishing line and netting entanglements, ingestion of line, lures and hooks or with hooks in their flippers.

“Sea World through the Sea World Research an Rescue Foundation is very proud to be able to assist in the recovery and conservation of all marine life and it is always great to be able to release the animals back to the ocean.”

Every time Sea World is involved in a rescue, a contribution is made to public awareness of a variety of species and with many marine animals calling Gold Coast waterways home, it is important to educate the community about the importance of caring for the marine environment.

For more information about the Sea World Research and Rescue Foundation go to seaworld.com.au/research-and-rescue