Blair spent just over two years rehabilitating at SEA LIFE Melbourne Aquarium after being rescued in December 2013 at Blairgowrie beach. During this time she became an ambassador for the plight of turtles in the wild, encouraging hundreds of thousands of visitors and students to further protect turtles in the wild and had a strong following at the time of her release in January this year.

Blair was found in a terrible state in 2013 weighing only 4.5 kilograms but thanks to SEA LIFE Melbourne Aquarium she made a full recovery and was released at a healthy weight of 25 kilograms from Gabo Island off the coast of Mallacoota in February.

Todd explains “Blair has being fitted with a state-of-the-art satellite tag that allows us to track her journey. Every time she surfaces and the tag makes contact with air it records her location.

“Blair has certainly been busy since her release; she visited Wilsons Prom, Tasmania and has now made it all the way to Western Australia!”

The tag, provided by the SEA LIFE Trust, through funds generated by public donations through events and coin spinners on-site at SEA LIFE Melbourne Aquarium, will provide important data, which will aid in further understanding sea turtle’s natural behaviour in the wild.

World Turtle Day has also seen the Sea World team release a Green Turtle back to the ocean at Currumbin Beach after more than three months of rehabilitation.

After being found stranded at Currumbin Beach in January, ‘Isabella’ was brought to Sea World and was under the care of the expert veterinary and animal care team while undergoing rehabilitation including feeding, veterinary checks, treatments and data collection.

Sea World is hoping the release will help raise awareness about the health and conservation of these incredible creatures and highlight the effect ocean rubbish has on turtles.

Sea World Curator of Fishes, Marnie Horton said it is a great result to be able to release ‘Isabella’ back to where she was originally found, stating “Isabella arrived in a poor condition but over time we got to a level where she was eating well and was very active in the rehabilitation pool.

“Isabella’s body condition and swimming behaviour has returned to normal and her appetite has increased so we have decided it is the right time to release Isabella and have opted to do this at Currumbin Beach.

“Sea World through the Sea World Research & Rescue Foundation is very proud to be able to assist in the recovery and conservation of all marine life and it is always great to be able to release the animals back to the ocean.

“On average Sea World rescues between 40 -70 turtles annually with many of these turtles come into our care with injuries due to human interaction such as fishing line and netting entanglements, ingestion of discarded plastics, fishing lines and hooks or with hooks in their flippers.

“With many marine animals living around Gold Coast waterways, it is important to educate the community about the importance of caring for the marine environment and how they can minimise their impacts.”

Sea World is currently also caring for six injured turtles, including two with amputated flippers, as a result of being entangled in marine debris and boat strikes.

Commenting on the problem of marin debris, Queensland Environment Minister Dr Steven Miles stated “each turtle rescued is a reminder that marine debris, which includes plastics and fishing gear, harms our most threatened and endangered marine species.

“As the Environment Minister it is my priority to shine the light on human created marine debris while our government gets on with leading an east coast approach to banning single-use plastic bags.

“Plastic bottles and single-use plastic bags are a real concern, for me and the many thousands of Queenslanders who want to reduce litter”

“Soon to be completed audits of rubbish caught up in storm water traps on the Gold Coast will also give the government a better picture of what people are littering, and what potentially is ending up in local waterways,’ he said.

Sea World’s Trevor Long said the turtles recovering at the park were among the lucky ones as not all marine life victims of marine debris and boat strikes can be saved. 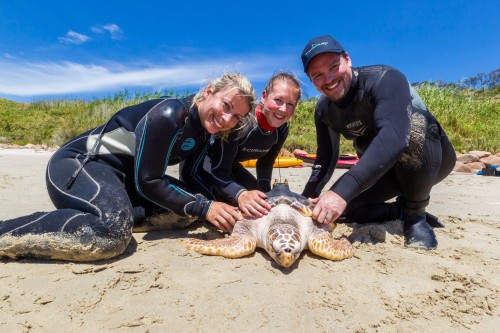 Long added “on average Sea World rescues between 40 and 70 turtles annually with many coming into our care with injuries due to human interaction such as fishing line and netting entanglements, swallowing plastic bags or with hooks in their flippers.

“Last year, the Healthy Waterways Clean Up Program removed over 115,000 items of litter from four rivers in South East Queensland, and almost 45% of this litter was plastic including bottles and bags.

“With many marine animals living around Gold Coast waterways, it is important to educate the community about the importance of caring for the marine environment and how they can minimise their impacts.”

World Turtle Day is the internationally recognised day to encourage human action to help turtles survive and thrive in the wild. Turtles are facing unprecedented threats in the wild, and run a gauntlet of risks just trying to survive. Fishing nets, plastic pollution, boat strikes, habitat loss and coastal development are individually and cumulatively impacting negatively upon turtle numbers around the world. Everyone can help protect these majestic creatures by remembering to reduce, reuse and recycle plastic waste.

Images: The route taken by Loggerhead turtle Blair since February (top) and Blair's release in February (below).