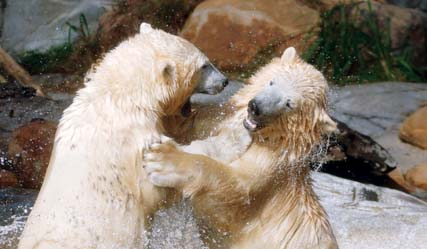 The Polar Bears at Sea World have joined in on International Polar Bear Day celebrations with 13-year old twins Hudson and Nelson helping to raise awareness of climate change and the ongoing conservation efforts to help save their species.

International Polar Bear Day is a worldwide day of action lead by conservation group Polar Bears International with the aim of preserving the future of the species and creating awareness about the importance of reducing carbon emissions.

Mulligan explained “at Sea World, guests can get an insight into Polar Bears in an environment which provides a unique educational experience that assists, through a wider public awareness, the conservation efforts of the species.

“For this year’s celebrations, we hosted a range of guided presentations, arts and crafts activities and enrichment workshops with the most creative designers having the chance to help enrich the Polar Bear Shores exhibit this morning.

“We have created a colourful and dynamic enrichment program for Hudson and Nelson which features some of their favourite foods and treats along with some really creative toys which were made by our guests.

“The main threat to Polar Bears in the wild is Arctic warming which is made worse by greenhouse emissions from human activities, and is causing sea ice to disappear leaving Polar Bears with insufficient time to hunt and less access to food.”

The Polar Bears at Sea World are ambassadors for their species and play a vital role in raising awareness of the effects of global warming. Current research indicates that Polar Bear numbers in the wild are declining, with just 20,000 to 25,000 bears remaining worldwide.

To find out more about Polar Bear Shores at Sea World go to www.seaworld.com.au