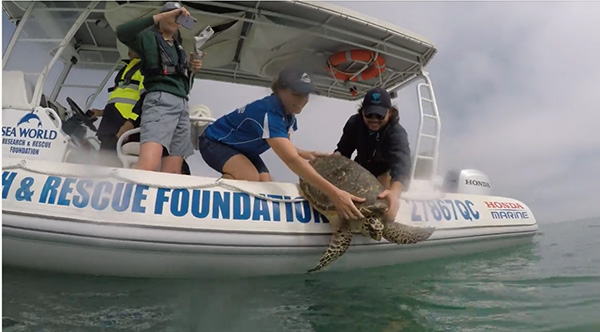 Sea World on the Gold Coast and the Queensland Department of Environment and Science have released four turtles back into the wild following the animals being rehabilitated at Sea World. Two green turtles, one hawksbill turtle and one loggerhead turtle were released at Amity Banks in Moreton Bay Marine Park.

Marine Park Ranger Natalie Sands said it is always a thrill to return animals to the marine environment and thanked Sea World for their tireless work in rehabilitating the turtles and preparing them to be released.

On the turtle’s rehab Sands advised “the two green turtles spent a few weeks at SeaWorld recovering from ‘floating syndrome’, meaning they were unable to dive far below the surface. The loggerhead turtle was rescued around a year ago and was badly entangled in old fishing line, which had also caused a number of injuries. The hawksbill was found in May with an injury believed to be from a boat strike.

“Once they were healthy again, all four were tagged and returned to the ocean at Amity Banks, which is an important habitat for turtles.”

Sea World veterinarian, Dr Claire Madden said it was a proud moment to see the turtles returned back to Moreton Bay area after giving them the clean bill of health, advising "it is always a happy occasion when we can rescue, rehabilitate and release any animal and our team was incredibly proud to join the QPWS team in the release efforts of these four turtles.

“It was especially pleasing to release the large loggerhead turtle who had spent over a year rehabilitating with us at Sea World after having a flipper amputated due to the severity of his injuries.

“We would like to thank QPWS, Coastguard and the many community groups and members of the public who have helped with the rescue operations of some of these turtles or alerted us to their whereabouts.”

“They were ready to go, and we’re hoping they can grow old and avoid any other human-related injuries or entanglements.

“August was a busy month for marine animal strandings in Moreton Bay with rangers receiving more than 60 reports.

“Boaties are reminded to know the zoning rules within the Moreton Bay Marine Park, and pay particular attention to the designated Go Slow areas, where vessels are not permitted to travel on the plane.”

To report injured or deceased turtles, or other injured marine wildlife, call the hotline on 1300 130 372.