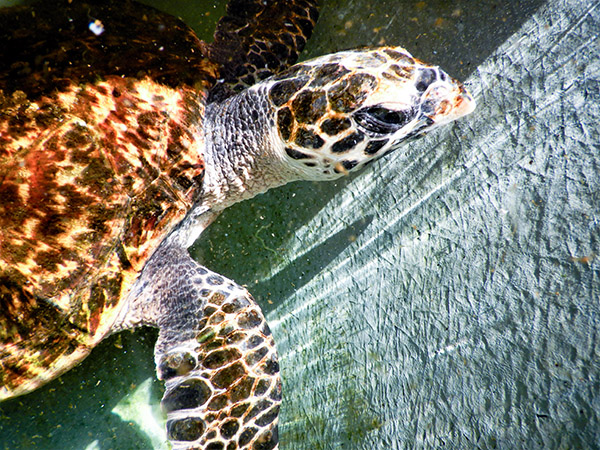 The SEA LIFE Sydney Aquarium team have assisted in the recovery of a small, barnacle - covered Hawksbill Turtle found fighting for her life in November last year.

Hawksbill is a critically endangered sea turtle that has experienced a rapid population decline over the last forty years due to human fishing and hunting practises. They are believed to have an estimated population of less than 25,000 left in the wild.

The 4kg turtle, named Avalon after the beach she was seen floating off in NSW, was barely responsive when the team picked her up and rushed her back to the aquarium’s Animal Rescue Centre for emergency treatment. Fortunately, she is now on the road to recovery and there are hopes that one day she will swim back into the wild.

Kellie Carmody, SEA LIFE Sydney Aquarium’s on-site Vet Nurse advised “when we first saw her, we didn’t think she would pull through. She was in quite a critical state and it was really important that we moved quickly so that we would be able to turn her health around in a positive direction.”

Using resources available inside the aquarium’s Animal Rescue Centre – one of only two centres licensed to rescue and rehabilitate turtles in Sydney – the team took bloods and conducted X-Rays to discover the young Hawksbill suffering from extreme dehydration, a severe infection and congested intestines. She was also covered in groups of crustaceans called barnacles that can cause discomfort and reflect poor health in turtles.

The team of sea life experts put Avalon on fluids and antibiotics as well as other supplements. Within a few weeks, she was responding positively to her treatments and heading towards recovery.

Carmody explained “after a few doses, Avalon was able to lift her head and respond to treatments. The barnacles started dropping away and her intestines have now cleared up.”

Although far from a full recovery, her carers are thrilled to see her on the road to restoring her health and hope that one day they will be able to return her to her home in the wild.

Saskia McDonald, SEA LIFE Sydney Aquarist and one of Avalon’s daily carers added “It’s great to see her get her fight back. It’s really important to us that we get her back into good health and give her a good chance at returning to the ocean so that she can contribute to repopulating her critically endangered species.”

Once Avalon has completed her recovery and been cleared by the Animal Rescue Centres veterinary team, a suitable location will be chosen for her release to the wild in accordance with thelicence from NSW National Parks and Wildlife.

The Darling Harbour-based centre is one of only two establishments in Sydney licensed to rescue and rehabilitate a vast number of sea life including sea snakes and turtles. In the last six months, the centre has housed and rehabilitated five turtles.

Beyond rescue and rehabilitation, the centre plays a big part in the White’s Seahorse Conservation Breeding Program established by SEA LIFE Sydney Aquarium, NSW Fisheries and the University of Technology.