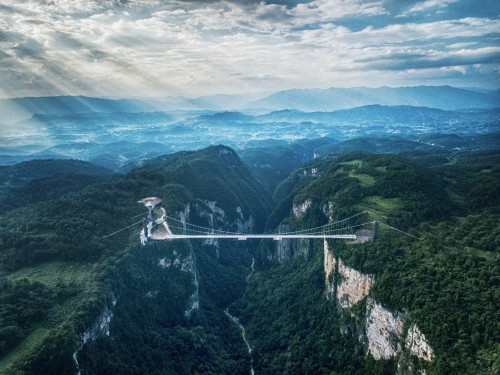 Glass-bottomed bridges in the Chinese province of Heibei have been closed due to safety concerns.

An increasingly popular form of tourist attraction in the topographically diverse region, more than 32 glass bottomed bridges have been built in scenic locations over the past decade.

However, following a number of reported deaths, since March last year officials in Heibei province have been shutting the bridges, citing "a lack of national standard and supervision", according to Chinese state-owned news service ECNS.

Among those closed is the Hongyagu glass bridge - which held the title of the world's longest glass bridge up until May this year - stretching 488 metres between two steep cliffs.

Heibei province was reportedly the first to introduce regional requirements of construction materials, designs and visitor numbers for the glass structures before announcing the closures, according to reports.

The announcement was followed by South China's Guandong province, which also demanded changes to similar bridges in its six different locations.

There are now more than 2,000 glass bridges across the country, as well as a number of glass walkways and slides, which are considered a huge domestic tourist drawcard.

However, earlier this year, six people were injured and one tourist died after falling off a glass slide in the Guangxi province.

It was reported that a man flew off the slide and died from severe head injuries because rain had made the slide extra slippery.

In 2016, a tourist was injured by falling rocks on a bridge in the Hunan Province and the following year a person died due to an accident on a glass slide in Heibei province.

State-media CGTN said the Chinese Government announced it would carry out comprehensive safety checks on all glass structures.

On Chinese social media, Weibo, users described their experience on one of the glass bridges in the Chinese city of Sanya as "scary".