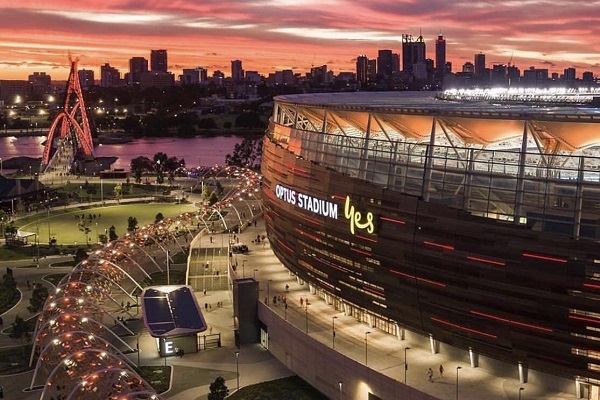 The request for proposals will require potential operators to submit detailed plans about how they will run the new adventure offerings at Optus Stadium and Matagarup Bridge.

Much of the infrastructure required for the climb experience and zip-line was incorporated into the Bridge's design and construction, when the Western Australian Government took control of the steel fabrication for the project.

The bridge climb would potentially allow locals and visitors to ascend 314 steps to the highest point of the locally built Matagarup Bridge, some 60 metres above the Swan River.

Meanwhile, thrillseekers will be offered the Matagarup Bridge zip-line, travelling 300 metres via cables from the halfway point of the bridge to a landing platform on Burswood Peninsula.

The Optus Stadium rooftop climb will start with a 220 step climb to the top of the venue and a 360-degree circumnavigation of the internal perimeter roof.

The tour finishes at the western edge of the roof, where visitors will be able to enjoy amazing views of the Swan River and Perth skyline from a new gantry.

Some events will also make use of new rooftop seats which provide a bird's-eye view of the action below.

Modifications to the existing stadium roof area will be made to allow greater accessibility for wheelchairs and those with impaired mobility.

Work has been underway to facilitate the rooftop climb into the wider contract, however it is likely the bridge climb and zip line will be operational first.

Potential operators also have the opportunity to propose other optional tourism experiences they think could be supported at Matagarup Bridge, Optus Stadium and within Stadium Park.

The proponents will have until September 2019 to submit their proposals, with a contract anticipated to be awarded at the end of the year.

"The time is right for Perth to leverage our landmarks, like Matagarup Bridge, the Swan River and Optus Stadium, to their true potential to help create jobs.

"Much of the infrastructure required to facilitate the climb and zip line was incorporated when the bridge construction was brought back to WA.

"This is a forward thinking proposal that will expand the everyday purpose of the Matagarup Bridge and Optus Stadium to provide a range of benefits to Western Australia, including financial outcomes and jobs.

"Our decision to change the design of the bridge and remove the cladding, allowed installation of stairs for the bridge climb and hook points for a zip-line during the construction phase, making these tourism opportunities possible."

Optus Stadium has also been awarded the title of the most beautiful sporting facility in the world, according to a panel of judges from the Prix Versailles awards.

The venue was announced as the competition winner ahead of Hangzhou Sports Park Stadium in China, Louis Armstrong Stadium in New York and Luzhniki Stadium in Moscow.