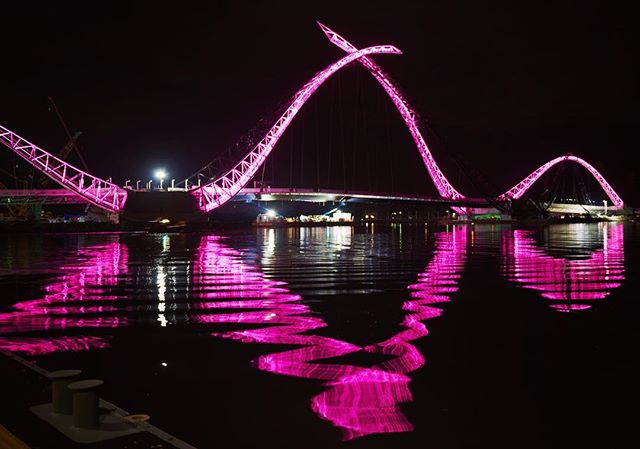 With Perth’s new Matagarup Bridge set for its formal opening on Sunday, preparations are being made for the introduction of adventure attractions on the new landmark.

Thrillseekers will soon be able to climb the new Bridge while a high speed zip line is also being considered.

The pedestrian bridge, which links the new 60,000-seat Optus Stadium with the city, is being seen as a key part of the revitalisation of East Perth.

Designed to represent a pair of Perth swans and resembling the form of a rollercoaster, the 65-metre peak has been designed with a view to hosting attractions.

Consultancy Saferight, which had input in the development of the Sydney Harbour BridgeClimb experience, has been responsible for the installation of the guest infrastructure.

Speaking with ABC Radio Perth, Saferight Chief Executive Mack McCormack said the construction would be completed next week, with the Western Australian Government having indicated to him it would be soon followed by the installation of ziplines.

McCormack stated “you're going to be able to climb to the top, and then have the option of the fast route down, because you have gravity on your side."

Once operating, the tours would accommodate groups of up to 20 at a time on a 33-degree climb up the steps of the 65-metre tall arches.

There are handrails most of the way up and climbers will be wear safety suits and harnesses that will see guests tethered to a safety cable with staggered anchor points.

At the peak of the climb, where the two swan-inspired arches meet high above the river, there is a steel walkway.

From this vantage point climbers will have 360-degrees views where they can take in Optus Stadium, the Swan River and central Perth.

With zip lines installed, climbers would then have the option to walk back down the arches or take a high-speed flying-fox-style zip line back to earth.

Landing areas for the zip lines have not yet been decided but could potentially be on either side of the river.

Workers on the bridge walked across it for the first time last week and engineers have since been conducting dynamic testing and fine-tuning ahead of its official opening.