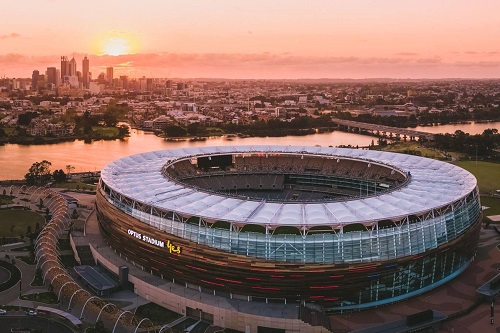 Perth's Optus Stadium was the world's most awarded stadium last year, winning 27 awards including top ‘project of the year’ at the TheStadiumBusiness Design and Development Awards.

The Stadium was also awarded five accolades in the 2018 WA Architecture Awards.

The WA Architecture Awards jury advised “the façade delivers the gravitas of a global city destination without sacrificing user experience. Visitors are drawn to the structure and reap the benefits of the thoughtful, holistic approach to arrival, navigation, experience and departure.”

One of the key elements is the stadium’s highly customisable lighting and media control, designed by Melbourne-based design studio Ramus.

The arbour, light façade, roof halo, screens and entrance lighting are connected to one advanced mapping system, so the whole stadium can be themed to respond to important fan moments.

Bruce Ramus, Artistic Director of Ramus advised “we wanted the stadium to have a unified visual expression - the video, lights and sports lights all sync to serve the moment.”