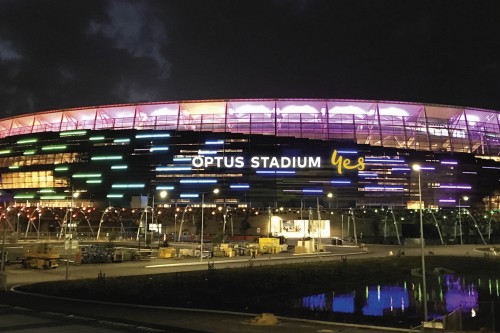 The new contract will seen KOJO’s local Perth team create and deliver unique game day experiences in a state-of-the-art broadcast and production suite at the venue.

Since the appointment, the team at KOJO, who provide similar services at the Adelaide Oval, have been working closely with Optus Stadium operator VenuesLive to complete the design and installation of the technical production suite, allowing the seamless integration of sound, vision and lighting to build the ultimate fan experience.

Introducing the partnership, Optus Stadium Chief Executive Mike McKenna stated “fans will be treated to a world-class experience, featuring revolutionary technology that puts the audience in the hot-seat.

“KOJO has built a reputation for pioneering amazing event day atmospheres and we look forward to wowing our audiences.”

Stephen Lord, Executive Director of Brand and Sport at KOJO, said they continuously refine how to deepen the fan-experience, adding “our vision is to engage with fans throughout their entire journey, building anticipation and excitement along the way.

“From the moment they step into the Stadium Park, fans will feel the venue’s vibrancy and atmosphere and we believe the stadium will very quickly become a central part of Perth’s sports and entertainment culture.”

KOJO operates nationally, with teams based in Adelaide, Melbourne, Perth and Sydney.