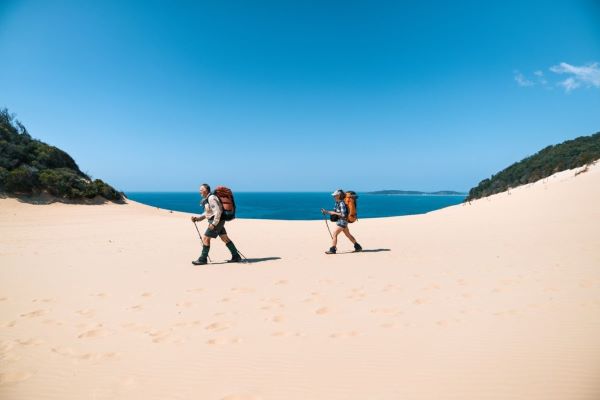 The Queensland Government has today announced CABN as its preferred tenderer to start construction on the Cooloola Great Walk, the first ecotourism trail to be delivered by the State Government. CABN are Australian experts in eco-friendly, off-grid, nature-based accommodation.

Tourism Industry Development Minister Kate Jones noted “Cooloola is one of the most picturesque places in Australia. With the right infrastructure, it has the potential to be a world-class tourism attraction.

“We want to attract thousands more eco tourists to the region but it’s important we strike the right balance and preserve the natural environment.

“CABN is already working closely with Kabi Kabi – the Traditional Owners - to feature their sustainable cabins along the trail.

“CABN’s simple approach is what we want – locally-sourced materials designed to make as little impact on the environment as possible while adopting a ‘leave no trace’ philosophy.”

With construction likely to be complete in late 2020, early estimates show the Cooloola Great Walk could attract international tourists seeking an ecotourism or wellness experience.

Always keen to highlight the job opportunities associated with new projects, Minister Jones enthused “this project means jobs for people on the Sunshine Coast. During construction we’re talking about building contractors and carpenters. Then once the trail is up and running we’ll need tour guides, chefs and cleaners.”

CABN currently operates in South Australia and Victoria, and now plans to establish a manufacturing facility in the Noosa hinterland as part of its successful delivery of the Cooloola project.

Kabi Kabi representative Brian Warner said the Traditional Owners of the land had already had good engagement with the short-listed proponents in the ecotourism process and added “our links here are over thousands and thousands of years and from now can help better tell that great story to the world.

“We look forward to working closely with CABN in allowing more people to enjoy our great country and story.

“We want to offer an authentic eco-tourism product for local and international travellers to experience one of Queensland's most environmentally significant and popular tourist areas.

“At the same time we want a minimal impact on the habitat that fosters cultural understanding, appreciation and conservation of the environment".

“CABN is looking to connect people back to nature, create better work-life balance, build off grid first-class facilities and create a positive impact on the wellbeing of all who experience the Cooloola Great Walk.”

CABN has been working with Traditional Owners for many months and consultation will now commence with the local community and potential suppliers.