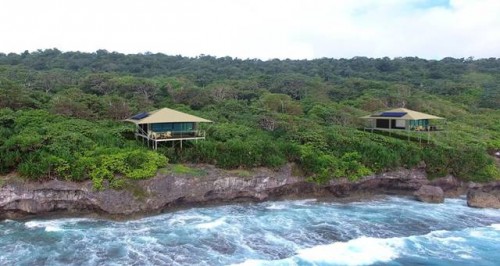 A luxury ecotourism lodge - the first such eco-accommodation allowed inside any of the Commonwealth national parks which include Uluru, Kakadu and Norfolk Island - has been approved inside the Christmas Island National Park.

With the Island’s immigration detention slated to close and the phosphate mine close to exhaustion, the development marks a shift in Christmas Island’ economy.

Swell Lodge’s proposed solar-powered, glass-fronted eco-chalets will be built along a 500 metre section of coastline, and are key to Parks Australia’s plans to open up Christmas Island’s unique national park to tourist operators for the first time.

Welcoming the development, Indian Ocean Territories Administrator Barry Haase commented “the Swell Lodge proposal by Chris and Jess (Bray) starts a whole new chapter for visitors with a love of nature and the spectacular.

“Nestled in luxury between ‘Jurassic’ like rainforest and dramatic seascapes, guests deserve the ultimate bragging rights.”

Parks Australia acting Director of National Parks Judy West also explained “(the) eco-style accommodation will allow travellers to immerse themselves in one of Australia’s most extraordinary national parks.

“Swell Lodge will be a win-win for Christmas Island National Park and tourism to the island.”

Christmas Island’s annual red crab migration of 45 million land crabs - described by Sir David Attenborough as one of the “10 greatest natural wonders on Earth”, still forces many of the Island’s roads to close temporarily each summer, during which time eco-lodge guests will have to walk the final section to their eco-chalets.

Swell Lodge owner and wildlife photographer Chris Bray comments “(that will be) part of the experience, iImagine if you were lucky enough witness that.”

“With no natural predators on the island many of the birds just nest right on the ground and are completely unafraid - it’s beautiful.

Known as ‘The Galapagos of the Indian Ocean’, Christmas Island features diverse and unusual landscapes, blowholes and a variety of birdlife including tropic birds, frigate birds, brown and red-footed boobies and many endemic species including the Golden Bosun and endangered Abbott’s Booby that nest nowhere else on Earth.

In April 2016, Parks Australia put out a public call for ‘Expressions of Interest’ for commercial opportunities inside the Christmas Island National Park, and the Brays - who already run small-group, luxury photographic tours around the world, including to Christmas Island - applied.

Bray continues “a lot of work went into ensuring the design would have minimal impact, including being pole mounted and using modern, odourless compositing toilets, as well as having an independent environmental impact assessment carried out involving ecologist site surveys both day and night.”

Giving final approval from Parks Australia this week, West added “(the development) has passed all the stringent environmental requirements to operate within the national park, and we look forward to sharing the world famous conservation values of Christmas Island with their guests.”

Lisa Preston, Chairperson of the Christmas Island Tourism Association, concluded “Swell Lodge has the potential to become one of Australia’s most sought after eco-accommodations.”

Construction is expected to commence later this year.