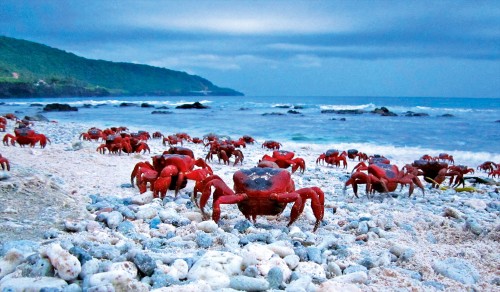 The Australian Government agency is looking to open up Christmas Island’s strange and wonderful national park to tourist operators for the first time.

Parks Australia called on entrepreneurs with proposals for ecotourism inside the rainforest to present their ideas, advising “there is nowhere else on Earth like Christmas Island National Park.

“With beautiful unique rainforests and deserted idyllic beaches, the park is home to wildlife of global significance, including tens of thousands of seabirds … surrounded by spectacular coral reefs, the park offers world-class diving opportunities and boasts internationally significant wetlands.”

With consultants having recommended allowing access to the National Park as a way of generating local jobs; one recommendation has included luxury tents inside the monsoonal rainforest.

Other suggestions have included tours that coincide with the annual red crab migration, when millions of red crabs leave their burrows in the rainforest and march to the sea to lay eggs. Weeks later, the translucent, blue-eyed baby crabs return and carpet the island.

This migration has been rated by environmentalist Sir David Attenborough as one of the world’s 10 greatest natural wonders.

There is growing hope that high-paying visitors to the vast monsoonal rainforest can help diversify the island’s sluggish economy.

Currently, the approximately 1,200 permanent residents of Christmas Island, a 2,700 kilometre flight from Perth, are heavily reliant on a phosphate mine that will cease exports within 10 years and on the uncertain business of immigration detention.

So far, attempts to create a stable tourist industry on Christmas Island have failed.

Island Administrator Barry Haase believes the future of tourism on the Australian territory depends on getting frequent, direct flights to Asia.

Parks Australia’s expressions of interest calls for proposals that adhere to the Christmas Island National Park Management Plan and be sensitive to the island environment.