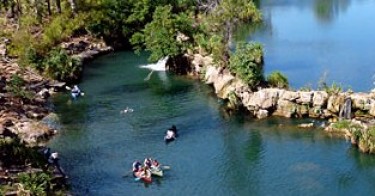 The Queensland Government is calling for more information on a number of proposals to grow the State's ecotourism sector.

Explaining the call for information, Minister Dickson stated "Queensland's protected areas are key tourism attractions, and our vision is to make Queensland a world leader in ecotourism by 2020, as the Newman Government continues to grow our four pillar economy.

"I was pleased to see a variety of projects - infrastructure such as a suspension bridge, zipline, mountain bike park and ropes/adventure course; accommodation facilities including resorts, permanent tents or ecolodges; and the reuse of existing facilities such as shearing quarters and lighthouses.

"They range from small-scale, low-expenditure projects to multi-million dollar developments, spread throughout Queensland."

Expressions of Interest for new and innovative ecotourism concepts, in and around Queensland's national parks were called for in June 2013, with 47 applications received in total.

"Our aim is to have contemporary and world leading ecotourism developments and I'm excited to see so many great proposals that will showcase our natural assets through best practice and innovative products.

"We are blessed with more than 1,300 national parks, marine parks and other reserves conserving a diverse array of species and ecosystems, our rich Indigenous cultural heritage and five World Heritage listed areas - more than any other state or territory.

"This will be a balanced approach - the amendment requires all approved ecotourism facilities be in the public interest, environmentally sustainable and preserve the natural and cultural values."

For more information go to www.nprsr.qld.gov.au/tourism/ecotourism/investments.html