Attraction in the Treetops 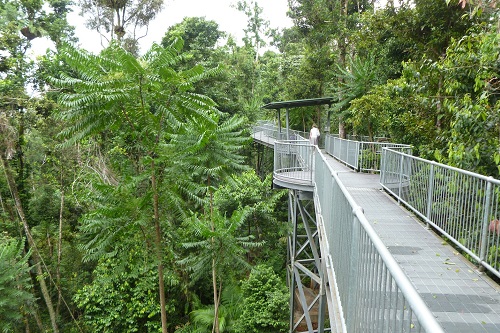 The Mamu Rainforest Canopy Walkway in the Wooroonooran National Park near Innisfail, North Queensland has opened.

The spectacular tree-top walkway, the largest project ever undertaken in a Queensland National Park, features a 2.2 kilometre forest walking track that links a 40 metre-high, 340 metre-long elevated walkway through the canopy with a 37 metre high observation tower.

The route uses the natural clearings created by Cyclone Larry, with cyclone debris mulched for use around the site.

Premier Bligh went on to state that âpeople from all over the world now will get the chance to learn more about the Mamu, their country and culture.

"It's also a tremendous shot in the arm for the tourism industry in north Queensland and a stunning way to celebrate 100 years of national parks in this state."

Minister McNamara explained that Queenslandâs Environmental Protection Agency had worked closely with the Mamu people to develop the walkway in a culturally and environmentally sensitive way, and to provide long-term employment opportunities.