Hassan Al Thawadi, Secretary General of Qatar’s Supreme Committee for Delivery and Legacy, has advised how the FIFA World Cup 2022 is helping to transform the Arabian Gulf region and accelerate Qatar National Vision 2030.

At the St. Petersburg International Economic Forum in Russia last week, Al Thawadi participated in two panel sessions during the three-day event, speaking alongside political, business and sporting leaders from across the world.

During the first panel, titled ‘Big Football in the Cityscapes’, Al Thawadi and his fellow panellists discussed how cities and countries can benefit from hosting mega-events.

During the panel, Al Thawadi emphasised the need for innovative legacy planning to ensure tournaments leave an impact on a country long after they have finished.

He explained “Qatar has always understood the potential impact of the World Cup and how it can accelerate our national vision and transform our country for future generations.

“From day one, we set about ensuring the tournament leaves behind not just world-class sporting infrastructure, but that it has a positive social and human impact on those in Qatar and across the region in the build-up to, during, and long after the tournament has finished.

"The World Cup is already helping Qatar develop new industries, attract new talent and investment into the country, and accelerate legislative change in critical areas, such as labour reform. It’s also helping promote football and a healthier lifestyle in Qatar. We’re still three years away from kick-off but we are already seeing the positive impact the tournament is having on the country’s development.”

Al Thawadi also noted how Qatar had learned much from the operations of Russia’s hosting of the 2018 FIFA World Cup. 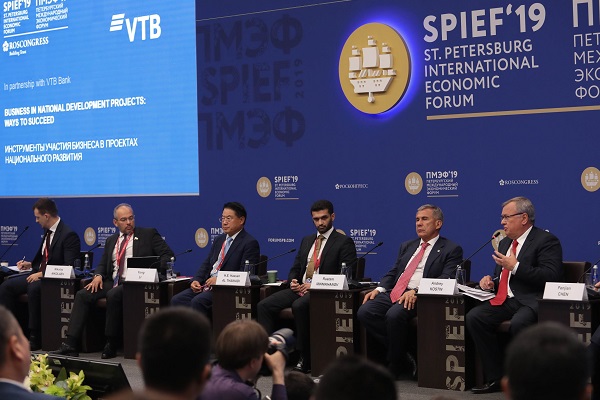 The second panel Al Thawadi participated in was titled ‘Business in National Development Projects: Ways to Succeed’ and transmitted live on the Russia 24 news channel. Panelists discussed the importance of public-private partnerships for large-scale infrastructure projects and examined the model of national vision strategies.

Here, Al Thawadi explained Qatar National Vision 2030, saying it had succeeded in driving and diversifying the country’s economy, and was using the FIFA World Cup™ to further accelerate its mission.

He stated “Qatar’s astute financial planning and diversification away from a wholly hydrocarbon-based economy into new industries, such as Islamic finance, medicine, education and sport, has helped the country’s economy thrive over the last two decades to become one of the region’s strongest.

“The hosting of the World Cup is just one vehicle we are using to drive public-private partnerships, diversify the economy and encourage international investors and companies into the country.”

Al Thawadi said Qatar and Russia share similar national visions and went on to discuss how both countries face similar challenges and opportunities in a rapidly changing global environment.

Images: Hassan Al Thawadi at the St. Petersburg International Economic Forum in Russia last week (top) and Al Thawadi in one of the event's panel presentations (below).