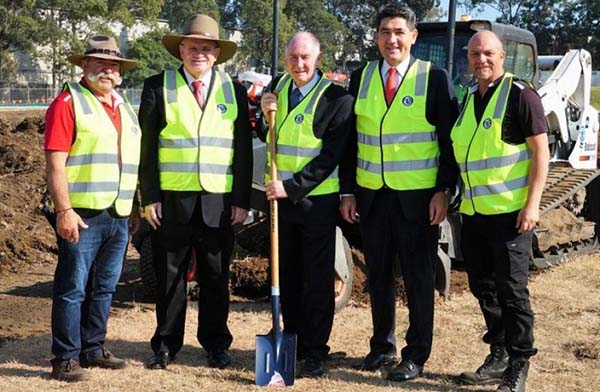 The City of Parramatta has commenced work on its Rydalmere Park multi-million dollar redevelopment, including a state-of-the-art synthetic grass field.

Joined members of the Rydalmere Football Club to celebrate the start of a series of upgrades to the 6.4-hectare park and associated facilities, City of Parramatta Lord Mayor, Bob Dwyer stated “the projects outlined in the Rydalmere Park Masterplan, which was developed following extensive community consultation, will turn this significant asset into a space that meets the community’s changing recreational needs.

“Community spaces and sporting facilities such as those at Rydalmere Park provide a valuable opportunity for people to connect with their neighbours, stay active and enjoy nature right on their very own doorstep.”

Among the improvements to the park is a $2.5 million upgrade to the northern playing field, jointly funded by the NSW Government’s Greater Sydney Sports Facility Fund and City of Parramatta Council. This field will receive a new synthetic grass playing surface, fencing and lighting to meet Football NSW National Premier League requirements. At a later stage, the two southern turf playing fields will also be upgraded.

Other works to the park will include the development of the former bowling club site for multipurpose use; increased vegetation, shade, shelter and seating; upgrades to recreational spaces such as the playground, multipurpose court and circuit path; and maintenance of existing amenities buildings.

Rydalmere Football Club President Peter Bacha thanked City of Parramatta Council and the NSW Government for making the long-awaited upgrade a reality, adding "the upgrade to these facilities will allow us to compete locally at the highest levels of the National Premier League competition and provide even more footballing opportunities for local kids.”

As Parramatta’s population grows, synthetic pitches will become an increasingly important part of the mix in providing the local community with sporting and recreational opportunities.

Image: City of Parramatta Lord Mayor Bob Dwyer joined members of the Rydalmere Football Club to celebrate the start of a series of upgrades to the 6.4-hectare park and associated facilities.