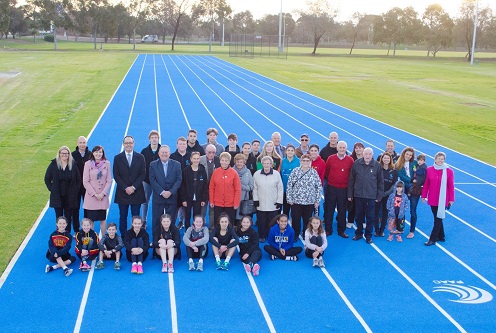 Opened at the end of last month by the Port Adelaide Athletics Club (PAAC), the 10-lane 120 metre track is the first of its kind in South Australia outside of the Athletics SA Stadium in Mile End.

Presenting new opportunities for the 350 athletes from PAAC and West Lakes and Districts Little Athletics Centre, the track was jointly funded by the South Australian Government and the Port Adelaide Enfield Council, who each contributed $200,000.

Prior to the opening, PAAC Secretary Kathy Nelson said it was very “exciting” to be the first club in the state to have its own synthetic track.

Nelson told the Adelaide Advertiser “our athletes will be able to train on the very best surface possible - it is international standard.

On the back of a rise in athletics participation in recent years, the Athletics SA Stadium is currently undergoing a $5.75 million facelift with much-needed improvements to its track, changerooms and lighting.

The extensive upgrade of the Mile End facility will include replacing synthetic running, jumping and throwing surfaces in the back training and warm up area, and improving the stadium’s lighting.

Earlier this year the South Australian Government also provided a further $995,000 to the City of Salisbury to install a new synthetic athletics track at Bridgestone Reserve.

Image: Stakeholders and Port Adelaide Athletics Club at the recent opening of the synthetic sprint track at Alan Iverson Reserve.