With netball the most popular female sport in South Australia the upgrades are aimed at increasing female participation in sport at both amateur and elite level.

The funding will see ‘Wikaparntu Wira’ (Park 22), home to 20 community netball courts in the South West Park Lands, benefit from a $3.2 million Planning and Development Fund grant to revitalise the precinct.

The upgrade includes resurfacing of the existing 20 courts, new seating, new community courts, a new lawn area and playspace, improved lighting and walking trails. The project will be completed in December 2017.

The South Australian Government has committed over $20 million from the Planning and Development Fund towards projects which support the vision of the Park Lands as attractive, diverse, resilient and alive with activity.

Netball SA Priceline Stadium will also receive a $4.5 million injection to fund key infrastructure improvements at the home of netball in South Australia.

The investment aims to enhance the venue to ensure it maintains its competition standards and provides a comfortable and welcoming environment for the 300,000 people who use it on an annual basis, ranking it as one of the State’s most frequented sporting venues.

The works will create approximately 12 local jobs and will support the maintenance of the existing 86 full-time, part-time and casual employees of Netball SA at the venue into the future. 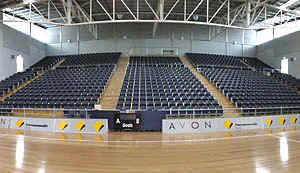 Commenting on the funding, South Australian Treasurer Tom Koutsantonis stated “in the past two Budgets the State Government has invested heavily to help increase women’s participation in sport.

“Last year we committed $10 million to construct female-friendly facilities at sporting clubs, and this year we are increasing that funding by an additional $14 million, as well as upgrading Priceline Stadium.

“I’m pleased that the State Government is also able to support local clubs and players through this announcement.”

SA Women in Sport Taskforce Chair Katrine Hilldyard added “to achieve gender equality in sport, we must provide facilities that are of a great standard and accessible to girls and women so that they can play the sports they love.

“Investment in local netball gives women and girls better facilities in which to participate, excel and reach for their sporting dreams. This investment demonstrates our commitment to advancing girls and women in sport, achieving gender equality in sport, and taking action that makes real and positive change.”

City of Adelaide Lord Mayor Martin Haese concluded “the netball courts in the South West Park Lands are one of the best-utilised sporting facilities in the City of Adelaide and we welcome this investment by the State Government.

“Improving sporting facilities in the Park Lands will encourage more participation in sport, increasing levels of physical activity and wellbeing in our community.

“We are pleased to partner with the State Government to deliver a top-grade sporting hub for one of the most popular sports in the country.”

Images: The Park 22 Concept (top) and the Priceline Stadium (below).