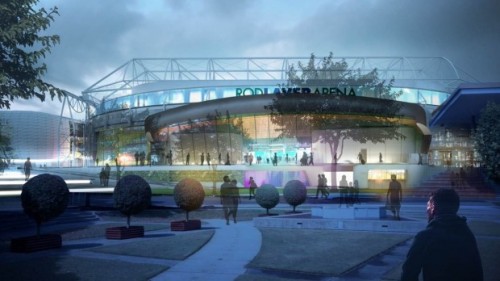 A massive refurbishment of Melbourne's Rod Laver Arena will include a new eastern entrance ‘pod’, new equipment rigging facilities so the venue can host larger entertainment events, automated retractable seating and a revamped loading bay that will drastically reduce the down-times between concerts and events.

The Victorian Government has awarded work on the $338 million ‘second stage’ of the Melbourne Park Redevelopment to builders Lendlease – the company that was to have built Melbourne’s scrapped East West Link toll road.

The refurbishment is part of the more than $700 million being spent on the Melbourne Park which includes a new administration and media building, and the already announced Batman Avenue footbridge.

As well as being the Australian Open’s centre court, Rod Laver Arena is the country’s most popular concert venue by ticket sales, with nearly 290,000 tickets sold at the venues in the first three quarters this year.

The refurbishment will allow bigger productions and for shows to be more quickly ‘bumped’ in and out as well as providing better dining facilities and player areas.

Commenting on the project, Victorian Minister for Sport John Eren stated “this fantastic redevelopment project will cement Melbourne’s place as the sporting and events capital, creating a better experience for the many thousands of people who attend the tennis and events at Rod Laver.”

Melbourne and Olympic Parks Chief Executive Brian Morris said the refurbishment and expansion would allow promoters to bring bigger shows to the arena and visitors would have a better experience there.

Morris stated “the improvements planned will be the most significant to take place in the history of Rod Laver Arena.

“The back-of-house upgrades will allow our promoters and hirers to bring bigger and better shows to the Arena, while the overall event experience will be greatly enhanced for our patrons.”

“We’re delighted to again work with the award-winning team at Lend Lease.” 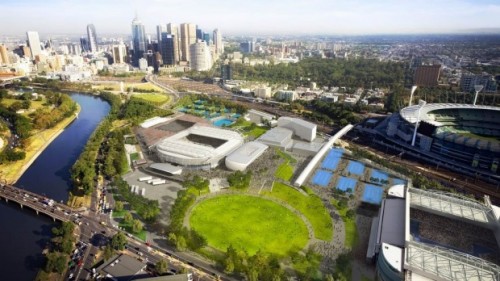 Tennis Australia Chief Executive Craig Tiley added “Rod Laver Arena was the first multi-purpose venue designed specifically to showcase tennis and this upgrade will guarantee it retains its place as one of the best arenas for our sport in the world.”

“Our fans know the atmosphere at Rod Laver Arena during the Australian Open is very special and every seat gets you close to the best tennis action in the world.”

Work at the Rod Laver Arena will begin after the 2016 Australian Open and is expected to be complete in 2019.

Images: Artist's impression of the new Rod Laver Arena, including the new entrance ‘pod’ to be built on the eastern side of the venue (top) and aerial view of the proposed changes.