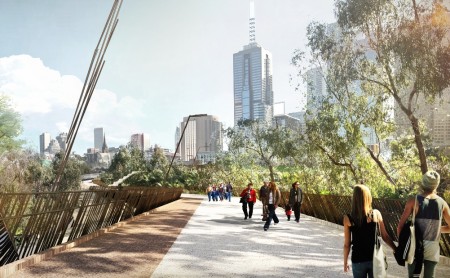 Works have begun on the Batman Avenue Bridge – a new pedestrian gateway from Melbourne’s CBD to the Melbourne & Olympic Parks sports and entertainment precinct.

The bridge - part of the $338 million Melbourne Park Stage Two redevelopment – will provide an express route to the precinct from the CBD, shaving travel time from Flinders Street Station to Melbourne Park to less than 10 minutes.

The bridge’s landing point is the heart of Melbourne Park, with direct access to Rod Laver Arena, Margaret Court Arena and Garden Square.

Construction of the bridge is expected to be finished in time for the 2017 Australian Open.