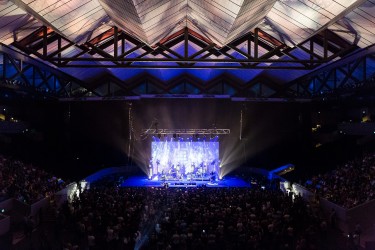 The new Margaret Court Arena (MCA) at Melbourne Park has emerged as an exciting addition to Melbourne’s live music market, offering a contemporary, mid-sized venue in the heart of the city’s entertainment precinct.

The landmark venue underwent a major redevelopment in 2014 that saw it transformed from an outdoor tennis court to a 7,500-seat boutique arena, revealed to a worldwide audience during the recent Australian Open tennis tournament.

MCA is now set to show off its credentials as a destination for live music. Holding around 6,500 people when in concert mode with the flexibility to downsize for smaller shows, the venue maintains an intimate experience for artists and patrons alike, regardless of the show size.

MCA’s proximity to the CBD – the venue is a 10 minute walk from Federation Square – means its location is conducive to the demands of Melbourne’s music-going public.

Melbourne & Olympic Parks Trust, Director of Commercial and Strategy, Greg George explains “one of our ambitions for MCA is to be able to develop domestic acts and emerging artists.

“At the same time, the venue also provides a more intimate option for the broader touring market.”

Some of the domestic offerings were previewed in late 2014 when MCA teamed up with Mushroom to provide a free gig featuring Dan Sultan, British India, Husky and Lanie Lane. Australian hip hop pioneers Hilltop Hoods were the first act to hold a commercial concert at the venue last October, while Angus & Julia Stone and Cloud Control kicked off 2015’s line-up in late February.

An eclectic mix of major international acts are also in the pipeline, with the likes of Sam Smith, The Black Keys, Billy Idol, Jessie J, Demi Lovato, Ben Howard and Yellowcard set to appear at MCA in the coming months. 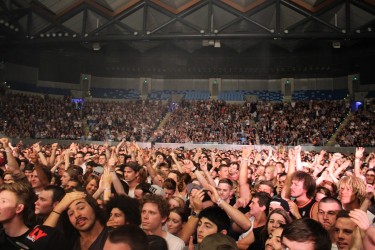 George adds “with MCA we can now target more niche and diverse acts as demonstrated by our current line-up of artists.

“It means we now have a venue to cater for certain genres that have probably been beyond our reach in the past.”

The redeveloped venue has been carefully designed to cater for concerts and not purely as a sporting arena, meaning a strong emphasis has been placed on sound quality and creating an acoustic envelope to contain noise within the arena and keep external noise out. The result is a truly world class sound.

The design features extend to the aesthetics of the venue, with finishes and appearance taking on an impressive quality not normally associated with arenas in Australia.

George adds “we’re certainly very excited about MCA’s potential as a live music venue and we’re looking forward to showing it off to Melbourne’s music community throughout 2015.”

For more information and acts at the MCA go to www.margaretcourtarena.com.au/all-events