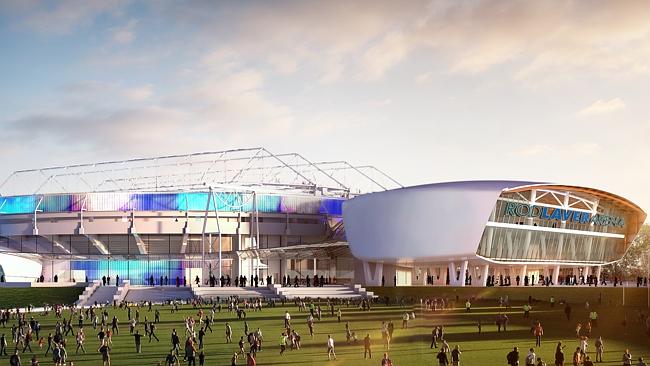 The Victorian Government has released plans for the first major redevelopment of Rod Laver Arena since its opening in 1988.

According to Victorian Sports Minister John Eren, the $700 million revamp will position the venue for more major international events including potential NHL hockey and NBL basketball fixtures from the USA.

Announcing the upgrade, Minister Eren stated “we are looking at options to bring international events to the venue (and) we like the sound of American football, we like NBA, we like the NHL hockey.

“We like events that people love and we want to ensure that we get those events.”

The refurbishment will see Melbourne Park’s largest venue expanded with a new eastern building serving as its main entry point and a new loading bay to increase access and allow for bigger shows and concerts to be staged.

Improved dining, a pedestrian bridge over Batman Avenue to Federation Square and Flinders St Station and an eight-storey building to house Australian Open administrators and media will be built.

Redevelopment of the 27-year-old venue will allow an increase in capacity for concerts but Australian Open tennis crowds are expected to stay the same.

Tennis Australia's Facilities Director Tom Larner explained that along with the new Margaret Court Arena, players and spectators’ experiences at the year's first grand slam would be enhanced.

Larner stated “the Australian Open has led the way in terms of facilities for players in the 27 years we've been at Melbourne Park.

“(The redevelopment) will ensure that for many, many years to come, the facilities that the Australian Open offers are the best in the world and the players love coming to Melbourne."

Construction will begin in February 2016, following next year's grand slam.

Rod Laver Arena will remain operational throughout the refurbishment which is expected to completed in 2020.

Overall, more than $700 million is being spent on the multi-year redevelopment of the Melbourne Park precinct.