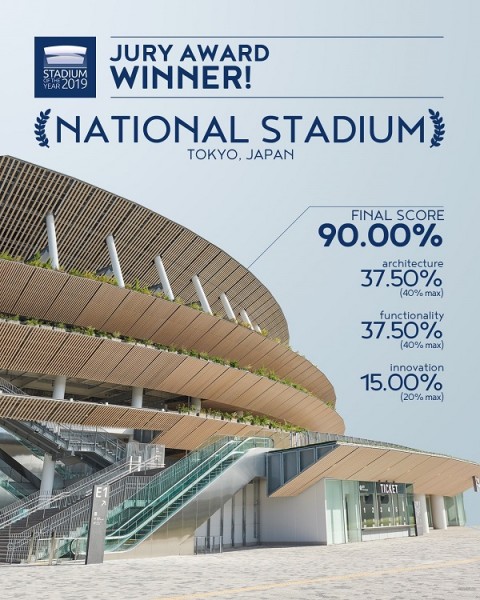 Tokyo’s Japan National Stadium, which was to have been the centrepiece of this year’s Olympic Games, has received the top Jury Award at the Stadium Database Stadium of The Year Awards 2019.

Presented by StadiumDB.com, a Polish-based website that analyses the construction and design of football stadiums around the world, the sixth edition of the Awards was run in two phases. The Jury first evaluated all 21 candidates and the shortlist of 10 finalists was revealed.

On 23rd March the final table of all 10 finalists was revealed with the winner - Japan National Stadium - being only the second Asian venue to ever win the Jury Award.

The Award acknowledgement stated that the Japan National Stadium was, while “not as imposing and futuristic as planned initially … a masterpiece of harmony, rhythm and functionality - all packed with warm wood greenery, creating a mix unseen in stadium design.

The public vote named the Puskás Aréna in the Hungarian capital of Budapest as winner.

The most represented countries in the voting were Hungary, Argentina, Indonesia, Philippines, Slovakia, Russia and United Kingdom.