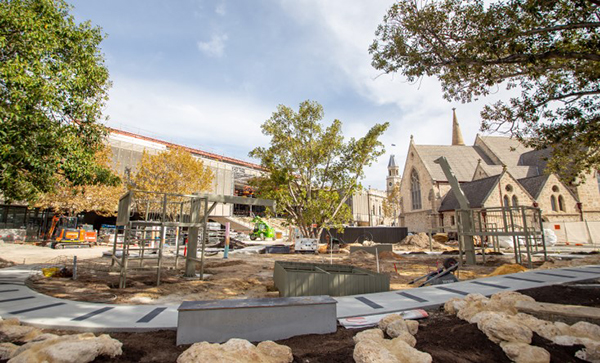 Inspired by Fremantle’s industrial history and close links with nature, the Kings Square playspace installation is moving forward with features to include cranes, bridges, train tracks and shipping containers. It will also incorporate natural features like water and trees, as well as bold lighting treatments and tactile nature play elements.

The play space has been partly funded through a $342,000 grant from Lotterywest. In addition to matching the $342,000 funding for the play space, the City of Fremantle is also currently investing over $2.5 million to upgrade the public spaces around Kings Square.

Around 170 Fremantle children and their parents were asked to help with the design of the playspace through surveys and a series of workshops at local schools.

WA-based landscape architecture firm Seedesign Studio were selected via a competitive tender process to develop a concept based on the feedback from the children.

A focal point for the play space will be the new Moreton Bay fig tree that was spectacularly lifted into place last September.

After more than a year of planning and preparation, the massive specimen weighing around 16 tonnes was transported through the streets of Fremantle on the back of a semi-trailer to its new home, where it was carefully lifted into position by crane.

The new Moreton Bay fig tree replaces the much-loved ‘Christmas Fig’, which had to be removed from Kings Square for safety reasons due to its deteriorating condition.

The play space is part of the $270 million Kings Square Renewal project, which the City of Fremantle is undertaking in partnership with Sirona Capital.

Fremantle Deputy Mayor Andrew Sullivan said the new playspace would help to make Kings Square a more vibrant, attractive and family-friendly place and noted “we want Kings Square to be a space that dispenses with formalities and invites everyone in to have some fun, to linger longer, to soak up the layers of culture and the juxtaposition of new and old architecture.

“The concept is for the playspace to have zones which will appeal to a broad age range from toddlers through to primary school children, as well as being accessible for children with disabilities.

“It will be directly opposite the café and restaurant space in the new Walyalup Civic Centre, so in future mums and dads will be able to relax with a coffee while still keeping an eye on the kids.

“Programmable lighting elements will also highlight the play space features at night, creating a whole new look and feel after dark and making it a feature of the broader public space in Kings Square.”

In addition to the play space, the City of Fremantle is also constructing the new Walyalup Civic Centre and library and rejuvenating the public spaces around the square.

Sirona Capital’s contribution to the project includes the redevelopment of the old Myer and Queensgate sites to create offices for state government departments and the revolutionary FOMO food, art and retail concept.

Last year more than 1700 staff from the Department of Communities and Department of Transport relocated to their new headquarters in Kings Square, providing a substantial boost to the local economy.