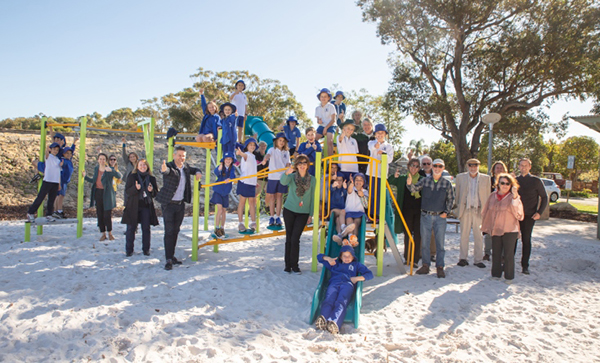 The City of Fremantle’s new play space at Frank Gibson Park has installed a range of play equipment to children of all ages engaged.

The Park was officially opened at a special community event last week.

The Frank Gibson Park play space project retained some of the features of the original playground like the barbeque, climbing net and established trees while adding a new playground combination with sand play underneath, a rock wall slide and climbing feature, three new swings and a new nature play area and cubby house.

Fremantle Mayor Brad Pettitt said children from East Fremantle Primary School had a big say in what was included in the design of the new play space.

Mayor Pettitt advised “Just a few months ago this playground was looking pretty worn out. It was about 20 years old and due for replacement as part of the City’s play space renewal program.

“To find out what people would like to see here and what sort of activities local kids would like to do the City talked to more than a hundred people, including community members, precinct group members and netballers who play at the Frank Gibson courts.

“We also visited the kids at East Fremantle Primary School, who created some fantastic models and designs which gave us some really important input.

“Our landscape architects then took all of that feedback and incorporated it into the final design, which has resulted in this brilliant new play space for kids of all ages to enjoy.”

Frank Gibson Park is just the latest City of Fremantle playground to undergo a facelift.

The City has also built an entirely new adventure playground at Tuckfield Oval on Cantonment Hill and created pocket parks in Hilton and White Gum Valley.

A highlight of the Kings Square Renewal project will be a major new play space inspired by Fremantle’s industrial and maritime history.