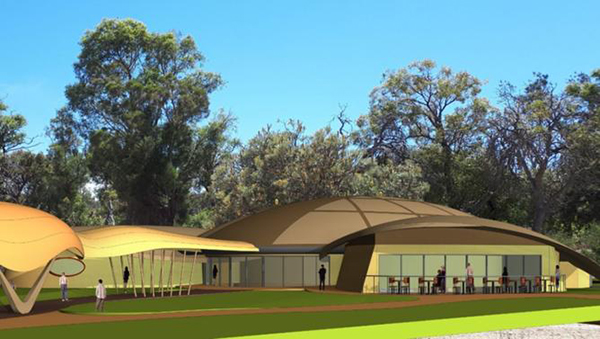 The City of Cockburn have announced that award-winning Fremantle-based Officer Woods Architects has been appointed to complete the final design of the City of Cockburn’s proposed $6.5 million Aboriginal Cultural and Visitors Centre.

Planned for completion by late 2022, the centre will be constructed on the western side of Bibra Lake, or Walliabup, on Whadjuk Nyungar Boodja (Country).

The Centre will promote and strengthen the area’s rich Nyungar history and living culture through stories, music, dance, language and art. It will include cultural education and meeting spaces, art and performance spaces, a visitors’ information centre and a café.

The location of the building connects strongly with the lake and its surrounding bushland with the centre’s key design themes including the Southwestern snake-necked turtle that lives in Walliabup, a curved design, fire, water and the integration of nature to ‘bring the outside in’.

City of Cockburn Executive Manager Strategy and Civic Support Gail Bowman said the area around Walliabup was as significant to the Nyungar people as Kings Park and added “evidence of a 55,000-year-old Aboriginal site in the area, is just one element of its cultural, environmental and heritage value.”

The Centre will promote and strengthen the area’s rich Nyungar history and living culture through stories, music, dance, language and art. It will include cultural education and meeting spaces, art and performance spaces, a visitors information centre and a café.

Officer Woods Architects won the 2017 National Architecture Awards Jury Prize for its design on the East Pilbara Arts Centre, built in Newman in 2016.

For more information go to cockburn.wa.gov.au/