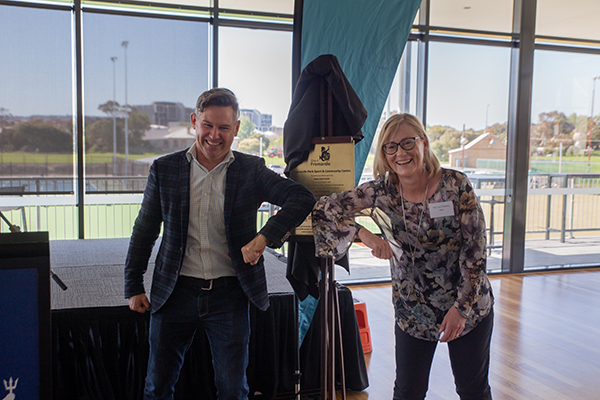 The Fremantle Park Sport and Community Centre, built by McCorkell Constructions, has been officially opened and will become the new home of the Fremantle Workers Social and Leisure Club, Fremantle Lawn Tennis Club and Fremantle Bowling Club.

Fremantle Mayor Brad Pettitt and Bicton MLA Lisa O’Malley unveiled the plaque for the brand-new sport and community facility, which the community is anticipated to enjoy for many years to come.

The $4.68 million project involved the demolition of the 1950s bowling clubroom and 1960s tennis clubhouse, the construction of the new Sport and Community Centre and the installation of two new hardcourt tennis courts and a new synthetic bowling green.

More than just a space for the three clubs, the shared community facility is also a versatile space for the wider community to use for conferences, meetings and dinners.

Mayor Pettitt advised “the concept of this shared sport and community facility was brought to the City of Fremantle’s attention many years ago by some very dedicated committee members from the three founding clubs.

“Over the years, the City and the three clubs have worked closely with the project architects and builders to create a shared facility that will meet a broad range of community needs.

“I would like to congratulate everyone involved in the construction of the Fremantle Park Sport and Community Centre; their hard work and dedication to seeing this project through to its completion needs to be commended and celebrated.

“Of course, this magnificent sport and community facility was only made possible thanks to the generous contributions of several key funding partners.

To complete the project, the City of Fremantle is now finalising concept design options for the proposed construction of a new car park facility adjacent to the site.