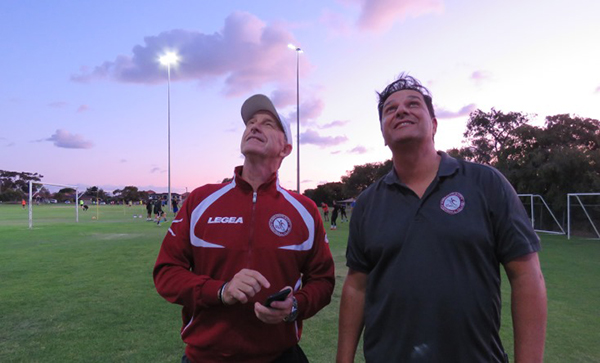 The new LED lights are significantly brighter than the old metal halide ones, can be switched on and off immediately without the need for warming up or cooling down, and can be controlled directly by the club using a mobile phone.

Fremantle City President Ian Cantley said the new lights have made a huge difference to the club advising “we’ve actually started training earlier this year than we normally do, and we’re able to do that because the lights give us that extra space.

“At this time of the year cricket is still training on one side of the park so we were in a position where we were finding it hard to train early in the season, but this year we’ve been doing it ever since the lights went up so that’s a month of extra training.

“We’re also bringing some of the training we’ve had at Bruce Lee oval down here and one of the reasons we can do that is because we’ve got more space now.

“We have a pathway right through from the juniors to the seniors and having them all here enables them to see each other training which I think is a great thing, especially for the kids to see the state team play and train.

“It’s brought the club together because people can meet at the club house after training whereas before we were a lot more fragmented.”

As well has being much brighter, the new lights also use much less power and are cheaper to maintain, which delivers significant savings to the club.

Cantley added “with the LED lighting it’s obviously more efficient so we’ve less of a power bill when the lights are actually on, but we also use less power because we can control them.

“We were in a situation where the lights could be on for an hour or more after training had finished before they would be switched off, whereas now we can program it.

“It makes it a lot more efficient for us and it means that people are little bit more aware of what we’re trying to do environmentally as well.

“We’re a not-for-profit organisation and we’ve really got to try and save everything we can so it was great for the council to put these in.

“Once the decision was made we knew it was going to be a win-win for us, and any saving we can make is always good.”

Following an audit of floodlights on all of its sporting fields last year the Fremantle Council allocated $120,000 for the new lights at Hilton Park in the 2019-20 annual budget. The council also prioritised the replacement of light towers at Frank Gibson Park and Gilbert Fraser Reserve for future budget consideration.

Image courtesy of City of Fremantle