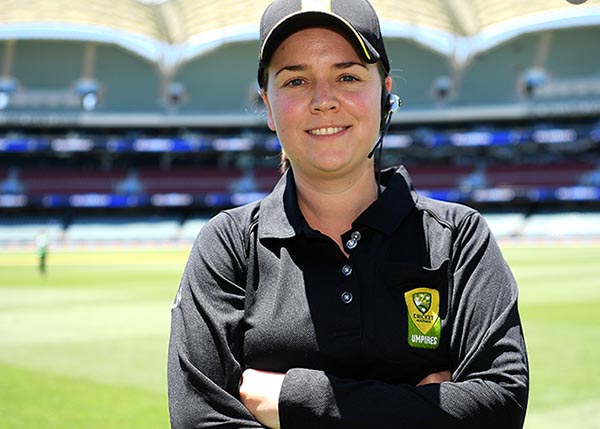 Cricket Australia has congratulated match officials announced for the upcoming Commonwealth Bank Women’s International Series between Australia and India with the appointments featuring some significant milestones.

Eloise Sheridan, who has previously stood in seven Women’s Twenty20 Internationals and who, this summer, has been elevated to the Cricket Australia Supplementary Umpire Panel (SUP), is scheduled to stand her first Women’s One-Day International (WODI) match in the second of the three matches to be played at the Great Barrier Reef Arena.

Sheridan’s fellow umpires Phil Gillespie and Claire Polosak together with match referee Bob Stratford are all set to be officiating in their debut women’s Test match. Gillespie is on the Cricket Australia National Umpire Panel (NUP) while Polosak, who became first women to stand in a men’s ODI in April 2019 when she officiated in the Namibia – Oman match in the ICC World Cricket League Division 2 in Windhoek and was fourth umpire in last summer’s Australia – India men’s Test at the Sydney Cricket Ground, is on the SUP.

Additionally, Bruce Oxenford, who this summer has rejoined the NUP after almost a decade with the International Cricket Council’s panel of umpires, will stand in two of the three WODIs and two of the three WT20Is and will be the third umpire for the Test match.

The series, which will feature three Women’s ODIs, a day-night Test match and three Women’s Twenty20 Internationals, commences on Tuesday 21st September with a WODI at the Great Barrier Reef Arena.

Cricket Australia Head of Cricket Operations and Scheduling Peter Roach congratulated all those appointed to matches in this series adding “for Eloise, Claire, Phil and Bob, the career milestones these matches will mark are testimony to their continuing excellence and are fully deserved.

“And we are delighted that the playing control team includes Bruce Oxenford as to have an umpire of his experience around the other officials can only be of benefit to them.

“That includes the Queensland and Federal Governments, the Board of Control for Cricket in India, the hotels and venues, the medical and biosecurity staff and the players and officials.”

The series will commence with three Women’s ODIs at the Great Barrier Reef Arena on 21st, 24th and 26th September before the action switches to the Metricon Stadium on the Gold Coast for a Test match from 30th September – 3rd October and then three Women’s Twenty 20 Internationals on 7th, 9th and 10th October.

Prior to the start of the series, the India squad will take part in two warm-up matches against a Cricket Australia XI on 16th and 18th September, with both taking place at the Ian Healy Oval in Brisbane.

Phil Gillespie and Claire Polosak will stand in the first of the warm-up games, with Eliose Sheridan alongside Bruce Oxenford in the second match, while Bob Stratford will oversee both as match referee.