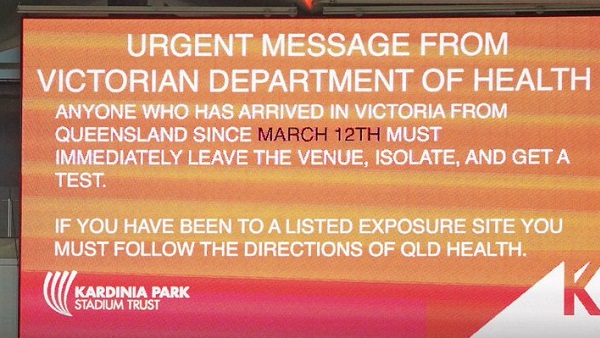 Queenslanders who travelled to Geelong’s GMHBA Stadium to watch the Brisbane Lions' away fixture with the Cats on Friday night were told to leave the venue during the game after news that a man in south east Queensland had tested positive for the Coronavirus.

With Victoria's Department of Health ordering anyone who had entered the state from the Brisbane or Moreton Bay areas to be tested and isolate until they received a negative result, around 30 fans were required to leave the venue.

TV commentators Wayne Carey and Luke Hodge were also instructed to leave GMHBA Stadium as part of measures that apply to anyone who has arrived in Victoria from Brisbane or Moreton Bay since 12th March.

The instruction came after a Brisbane landscaper tested positive to Coronavirus, with genomic testing linking his case to a previous cluster involving two overseas travellers and a doctor at the city's Princess Alexandra Hospital. 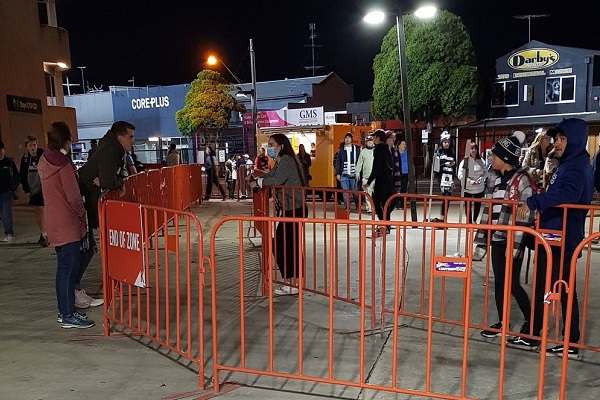 The match at GMHBA Stadium was allowed to go ahead with the AFL releasing a statement on saying Lions players had been given approval to play the match in Geelong by the Victorian Government.

The Lions players and staff arrived in Melbourne on Thursday in preparation for the round-two AFL game and are expected to have to remain at their Geelong hotel for several days.

Images: The announcement that flashed on GMHBA Stadium's video screen during last night's game between the Cats and Lions (top) and fans at the venue prior to the game (below).