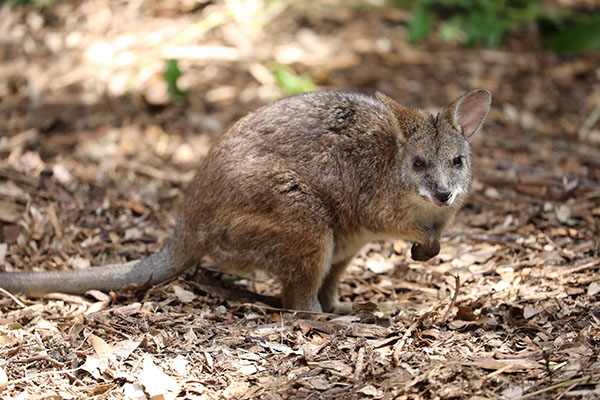 Conservation organisations - Aussie Ark, WildArk and Re:wild - have awarded $15,736 to University of Newcastle for their project ‘Surviving the Inferno – How threatened macropods survived the “Black Summer” bushfires', as part of their Australian Endangered Species Recovery Grants.

The Parma wallaby is one of the most poorly known mammals in Australia with no scientific study being undertaken on it since the 1970s and the IUCN Red List assessment relying on a guesstimate of 5000 individuals since 2000. Yet this species has disappeared from the north of its range, and 70% of its distribution was affected by the black summer fires of 2019/20. It is critical to assess the status of the species, its distribution and factors impacting this, its movement patterns in burnt and unburnt areas and how this affects corridors through the landscape, its diet, and stress levels.

The University of Newcastle projects aims to determine the current distribution of the Parma wallaby and factors driving this distribution. As well as determining population densities of Parma wallabies at sites inside and outside the black summer burn area and if the movement patterns of the wallabies inside burnt areas place them at greater risk of predation than those inside unburnt areas.

The Australian Endangered Species Recovery Grant is part of the Koala Comeback Campaign. It aims to provide funding for organisations carrying out research projects that quantify the bushfire’s impact on Australia's threatened species and identify urgent needs that exist for wildlife living in fire-affected areas.

Ten exceptional projects, including this one, will be awarded grants of up to $16,000 for their outcomes-based research that has measurable outcomes in the next 12 months. Much of this research includes species population surveys, protecting unburnt habitat, or implementing other critical interventions identified by species experts.

Thanks to generous donations, the #KoalaComeback campaign, a partnership between WildArk, Re:wild and David Yarrow Photography, has supported many organisations working on the frontlines bushfire recovery and habitat protection in the wake of the 2019-2020 bushfires.

WildArk is a global not-for-profit conservation effort that was founded in 2016 with a mission to promote and support activities that educate, enable, provide resources or inspire humanity to sustainably conserve, protect or restore the environment and the world’s ecosystems, natural resources, wildlife and wild places.  Learn more at www.wildark.org.