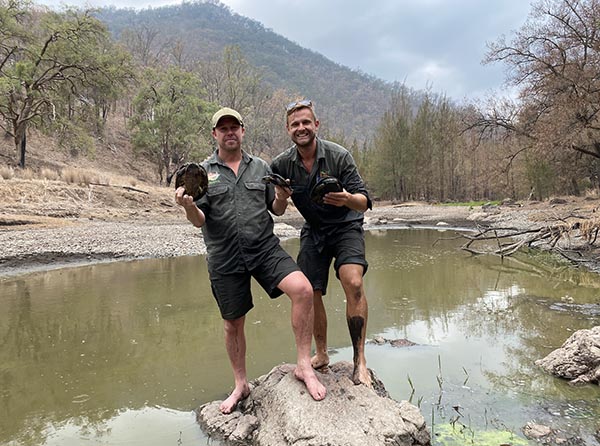 Aussie Ark has been recognised for providing direct and indirect refuge through species and habitat recovery to 14.5% of the 113 animal species identified as needing urgent management following recent fire and drought crises.

That number swells to 32% when excluding invertebrate and fish species. Conservation action in this decade will determine the fate of many of our country’s unique animals.

On Tuesday 11th February 2020, the Commonwealth Department of Agriculture, Water and the Environment released the list of 113 animal species requiring urgent management  intervention over the months following the 2019-20 bushfires in Australia.

The 2019-20 bushfires in New South Wales have been unprecedented in their extent and intensity. As of 28th January, the fires in NSW had burnt 5.3 million hectares, which is 6.7% of the entire state, this includes 2.7 million hectares in national parks.

Australia is home to more species than any other developed country with most of the nation’s wildlife found nowhere else in the world. Australia also has the worst mammal extinction rate on earth, at least 29 of Australia’s 273 mammal species have gone extinct since European colonisation. To put this in a global context, one out of three mammal extinctions in the last 400 years has occurred in Australia. An additional 21% is predicted to go extinct at a rate of one to two species per decade without swift conservation action.

Aussie Ark has a broad focus on preserving endangered and threatened New South Wales native species in the greater Barrington Tops region. The facility is at the epicentre of fire affected habitat situated in the Barrington Tops. The species that Aussie Ark is committed to saving were under threat pre fire, and now have been heavily impacted by recent catastrophic events.

The Barrington Tops region in New South Wales, Australia, is home to more than 15% of all Australian vertebrate species and are renowned as being one of the few places where remnant Antarctic Beech forests remain in New South Wales. The ancient Barrington forests, due to their age and size, are a critical sink for carbon storage and absorption and are one of only seven major temperate rainforests remaining in the world.

Aussie Ark is focused on species recovery with projects already in place to protect the Brush-tailed rock-wallaby Tasmanian devil and several other species. Additionally, the Ark is committed to habitat recovery with projects such as Koala Ark and a series of wild protected sanctuaries. Aussie Ark has secured 7000 hectares of critical habitat to manage and protect well into the future. Ambitiously, they seek to protect 20,000 hectares of land in the Barrington Tops region. This will be achieved through land lease, private land acquisition and the management of state forest.

Aussie Ark is recognised on a global level by organisations such as Global Wildlife Conservation and conservation leaders such Leonardo DiCaprio. However, more is needed. Aussie Ark calls upon corporate, community, government and conservation groups to join them in securing the future for native Australian wildlife.

As a not for profit organisation, Aussie Ark raises the necessary funds to continue its ambitious vision.

Image: Aussie Ark staff alongside president Tim Faulkner have collected the first Manning River turtles to begin the establishment of a robust insurance population of the endangered turtles.