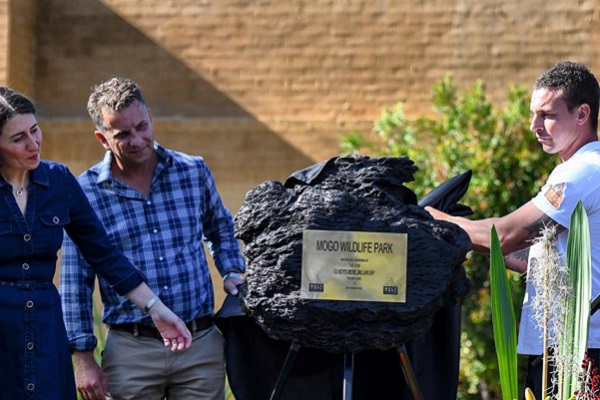 Mogo Wildlife Park has reopened its doors, two months after staff protected its hundreds of animals from a devastating bushfire that swept through the NSW south coast on New Year's Eve.

NSW Premier, Gladys Berejiklian was on hand yesterday to mark the reopening with the public admitted from today.

Free tickets have also been handed to local families impacted by the destructive fires, giving them the chance to welcome back the popular tourist attraction and celebrate a story of resilience.

The attraction came under threat when the Clyde Mountain fire tore through the nearby township of Mogo. While the town was evacuated stayed on at the zoo and enacted their fire plan.

While residents in the small coastal town were advised to head to the beach on New Year's Eve morning 16 staff from the zoo decided to go to the park to protect the some 200 exotic animals.

Some businesses in town were destroyed but, aside from damage to the perimeter fence, the park was largely unscathed and all animals were kept safe.

Advising that the survival of the animals was down to a well-executed bushfire plan,

Mogo Wildlife Park Director, Chris Staples told the ABC “people have said ever since New Year's Eve, 'What made you make the decision to stay?' There was never a decision - it had to be this.

"These animals are family and that was shown by everyone who stayed."

Staples said some of the animals sheltered in his own home on the zoo premises, larger animals such as giraffes and rhinos were given access to all of their paddocks, and the more dangerous species like lions, tigers, gorillas and orangutans were held in their night dens.

He said the survival plan included access to plenty of water and staff were in constant communication via two-way radios.

Advising that the attraction had been impacted by the loss of visitors over the peak summer season but it was a relief to get back to normal, Staples added "the simple fact is there's nothing better than that beautiful energy of people enjoying encounters with animals, and I'm desperate to have it back again."

After two months of cleaning up, the NSW Premier Gladys Berejiklian and NSW RFS Commissioner Shane Fitzsimmons joined other dignitaries in marking the parks reopening.

Fitzsimmons stated “in my view, the Mogo Zoo is a role model for how people should prepare and plan for bushfires and disasters impacting them.

"You've only got to look around at the extraordinary grounds here, the wildlife - and to have largely boundary fences impacted and requiring repair, but every animal survived."

Calling on tourists to visit and support bushfire-impacted businesses, Fitzsimmons went on to say “we want people right across NSW, right across Australia, right across the world to come and visit NSW, visit all those fire-affected areas of NSW including the south coast, they want you to visit.

"What I can guarantee you is there will be plenty of smiles and there'll be a warm handshake to welcome you to their town and serve you and support you on your visit to these areas."