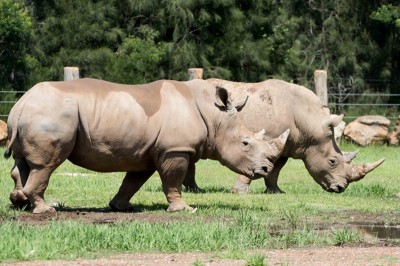 As it reaches the end of its 25th anniversary year, Mogo Zoo is preparing to unveil a new exhibit featuring two endangered southern white rhinoceros.

The popular zoo, located near Batemans Bay on the NSW South Coast, welcomed the pair on Christmas Eve but has been forced to delay opening of the exhibit while the two young males have been settling into their new surrounds.

Half-brothers Kei and Jabari, both aged eight, each tip the scales around four tonnes each and are about 1.8 metres tall, which makes them the largest animals at the Zoo.

Mogo Zoo Operations Manager Paul Whitehorn told The Canberra Times that their the move from Australia Zoo in Queensland had "upset the balance of power between the two" and they were being kept in separate enclosures for now.

Whitehorn explained “they're a little unsettled obviously, being in a new place (but) are settling in as well as can be expected, which is why we haven't released them to the public just yet.

"We want them to be as comfortable as possible before they have people around them."

Whitehorn said the animals were generally quite placid but Kei, the dominant of the pair, had been "a bit pushy".

He added “they've had a couple of disagreements over dominance and territory," he said.

Dr Young stated "the species is reducing in the wild and they're still under enormous pressure from poachers so it's very important to have assurance populations."

Whitehorn added "I would be thinking in the next five or so years we will be bringing some females in for the breeding program."

Mogo Zoo Owner Sally Padey said taking on the African rhinoceros through the Australasian Species Management Program was one of the biggest projects staff had embarked on in the zoo's 25-year history.

Padey stated “to think that rhino were nearly hunted to extinction for its horn is unconscionable to me and Mogo Zoo will play any role necessary to ensure the ongoing conservation and preservation of this magnificent creature".

Dr Young said Kei and Jabari were generally quite placid and affectionate, but had quite different personalities, adding “Kei as the dominant animal is a little bit more alert about what's going on in his surroundings, while Jabari's a bit more laidback."

Once they're comfortable in their new exhibit, Kei and Jabari will spend their days chewing through almost 30 kilograms of oats, hay and lucerne each day and staff will give educational talks on the species.

Marking its 25th anniversary year, visitors to the Zoo during February have been receiving a free Paddle Pop.

The promotion proudly supported by Streets ice Cream, and celebrates their long affiliation with the Zoo.