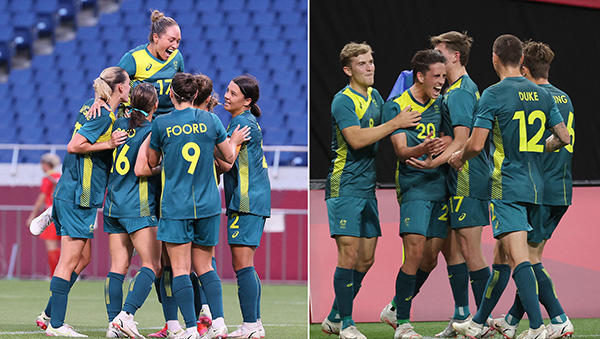 Having analysed the audiences that engaged with Australian football throughout Tokyo 2020, Football Australia has today advised of its confidence that Australia’s national football teams are well-positioned to continue receiving high levels of fan engagement.

Football Australia Chief Executive, James Johnson advised “this week we have completed a deep-dive into the audiences that engaged with Australian football throughout Tokyo 2020. Some of the outcomes provide us with genuine confidence and optimism that we are on the right path with our national team products, particularly as we have several major competitions for both our men’s and women’s teams on the horizon.”

Australian football was represented in the Australian Olympic Team at Tokyo 2020 by both the Matildas and Olyroos, with both squads drawing enormous television audiences, as well as achieving compelling social engagement and media interest throughout their respective campaigns.

Cumulatively the Matildas and Olyroos were viewed by just over 9.7 million Australians throughout Australia’s nine football matches at Tokyo 2020, highlighting the significant platform that the Olympic Games provides to the sport, as well as football’s capacity to attract huge audiences when elite fixtures are contested in primetime.

Johnson highlighted “an average of 1.87 million viewers – the largest average audience for a women’s team sports broadcast in Australian history – supported the Matildas when they took on Sweden in the Semi-Final of the Women’s Football Tournament, while the number of Aussies rallying behind the Olyroos against eventual Silver Medallists Spain peaked at 1.97 million viewers on 25th July.

“From a fan engagement perspective these are compelling figures and provide a great platform for us to build on over the coming years as we progress towards the FIFA World Cup Qatar 2022™ with the Socceroos, the FIFA Women’s World Cup Australia/New Zealand 2023™ with the Matildas, and of course the Paris 2024 Olympic Games, which is just three years away.” 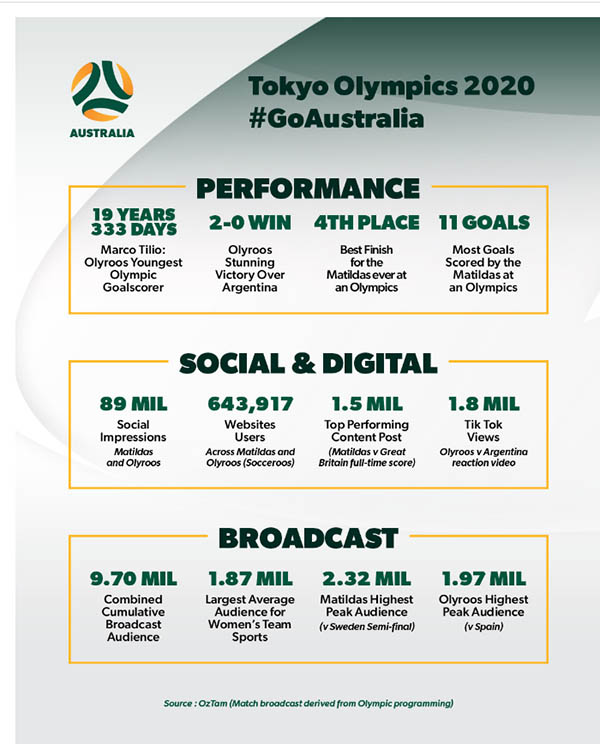 These fantastic figures were fuelled by the exceptional performances of both squads, with the Matildas securing their best-ever result at an Olympics or Women’s World Cup with a fourth-placed finish at Tokyo 2020, and the Olyroos producing two inspired performances throughout their Group C campaign.

“While the Olyroos didn’t progress from Group C – a pool labelled by fans and pundits prior to the tournament as the ‘Group of Death’ – they did manage to shock the world with a stunning 2-0 victory of Argentina a day prior to Tokyo 2020 Opening Ceremony, and push Spain all the way in a narrow 1-0 defeat on matchday two,” Johnson added.

“The Olyroos hadn’t qualified for the Olympic Games since Beijing 2008, and the win over two-time Men’s Football Gold Medallists Argentina was just Australia’s fifth since Barcelona 1992 when the tournament transitioned to a tightly contested, 16-nation aged-based competition.

“Individually and collectively, the Matildas produced a number of enthralling displays while in Japan. Sam Kerr became Australia’s all-time women’s national team top goal scorer courtesy of her six goals in the tournament, while Kyah Simon became the first Indigenous Australian to play 100 matches for the Matildas. Tokyo 2020 also marked 21-year-old defender Ellie Carpenter’s 50th senior appearance for Australia at what was her second Olympic Games, as the Matildas fell just short of claiming bronze.”

Alongside hosts Japan, Brazil, and New Zealand, Australia was one of only four nations represented at Tokyo 2020 in both the men’s and women’s football tournaments. Marco Tilio also became the Olyroos’ youngest ever goal scorer at the Olympics, firing a stunning strike to extend Australia’s lead of Argentina at 19 years and 333 days old.

Despite the challenges of COVID-19 globally, there is still plenty of international football for Australian football fans to look forward to throughout 2021. The Socceroos will feature in Round Three of FIFA World Cup Qatar 2022™ qualifying throughout September, October, and November, while the Matildas will continue their progression towards the FIFA Women’s World Cup 2023™, to be held on home soil, with a series of friendly matches to be announced in due course.