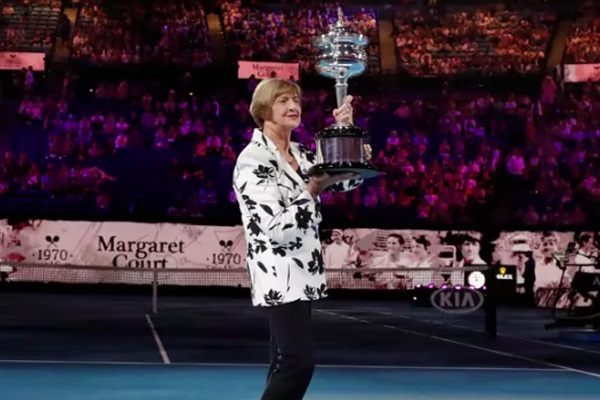 Australian tennis great Margaret Court has been acknowledged by Tennis Australia for her on-court achievements.

In a ceremony at the Australian Open on Monday night, Court received a special trophy presented by Rod Laver.

The ceremony at the Rod Laver Arena marked 50 years since she won the Grand Slam, claiming all four major tennis tournaments in 1970.

She still holds the all-time record of 24 grand slam single titles in her career, one more than Serena Williams.

However, her comments on race, homosexuality and the transgender community over recent years have sparked protests at previous Australian Open tournaments and created a challenge for Tennis Australia, which has distanced itself from her personal views.

Despite this, as Court held the trophy aloft, the crowd applauded, cheered and whistled.

Australian Open Director Craig Tiley emphasised that the presentation was purely a recognition of Court's sporting accomplishments, explaining "there's a difference between a recognition of that and a celebration of someone. Her recognition is for her tennis achievements only."

Long retired from tennis, Court is the pastor of the Victory Life Centre, a Christian church in Perth.

In an interview on ABC Radio Perth last week Court, advised that she felt she "deserved" recognition, stating "it is something that I did for my nation and I'm always very proud of it.

"I just wish the press would keep to my tennis."

Court attracted fierce criticism from LGBTQI allies in 2017 when she wrote an open letter stating she would boycott Qantas over its support of same-sex marriage.

In 2013, Court wrote a letter to the editor in a newspaper lamenting the birth of Australian tennis player Casey Dellacqua's child in a same-sex relationship.

She wrote "it is with sadness that I see that this baby has seemingly been deprived of a father."

Wintour commented "intolerance has no place in tennis.

Meanwhile, in a show of inclusivity, the Australia Open will host its third 'Glam Slam' event at Melbourne Park from 30th January.

The event features more than 200 players from 30 countries and is the only LGBTQI tennis event in the world to be staged during a Grand Slam tournament at the same venue.